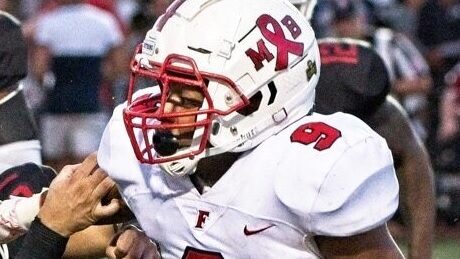 FAIRFIELD — JuTahn McClain rushed for 221 yards on 22 carries and scored two times, including a 68-yard game-clinching counter sweep with just under 4 minutes left to play, as the Indians mustered their way past Lakota East 20-14 on Friday at Fairfield’s Alumni Stadium.

The win moves Fairfield, which is ranked 5th in the Division I state poll, to 6-0 overall and 4-0 in the Greater Miami Conference.

“We thought we had to be physical and tough. That’s a really good Lakota East football team,” Indians coach Jason Krause said. “It was a dogfight. It really was. I think our defense played really well despite us giving them some pretty short field positions a couple times.

“We talked on the headset about how we run the ball well with JuTahn on the counter sweep,” Krause added. “We decided to run it there towards the end and he took it 68 yards for that touchdown.”

Lakota East, which slipped to 3-3 overall and 2-2 in the GMC, got a pair of TD plunges from quarterback Mark Krajewski.

“Obviously (Fairfield) is a great team and they make plays,” Thunderhawks coach Rick Haynes said. “Some turnovers hurt us, but I think our kids played their tails off.”

Dashaun Simpkins caught a 34-yard touchdown from Sawiaha Ellis to tie things up at 14 with 5:50 left to play, just before McClain’s game-winning TD run.

Other area results from around the county: