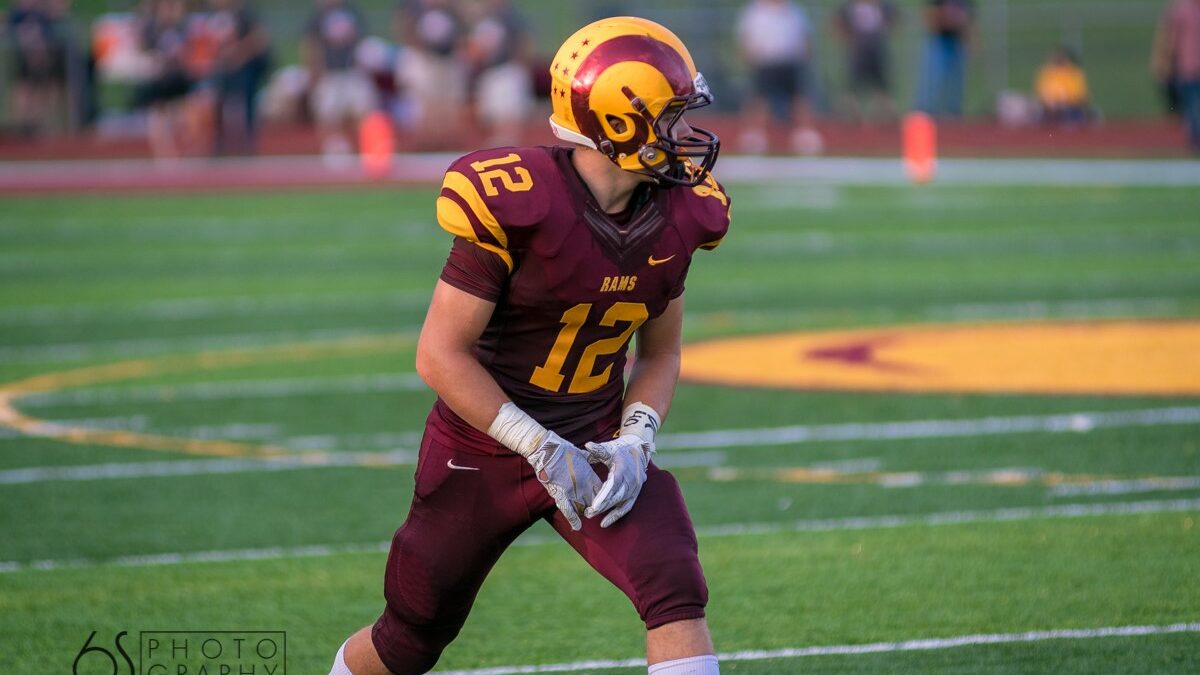 ROSS TWP. — Ross High football coach Kenyon Commins ended his post game remarks to his players on Friday with this: “You won 41-18 and you’re upset about how you played, and I like that.”

The Rams dispatched a plucky Northwest Knights team that hung around in a sloppy rain soaked game and maintained their tie atop the Southwest Ohio Conference standings with Harrison.

With 1:35 left in the first quarter Northwest struck first with a 31-yard touchdown strike on fourth and 17 from Logan Lawson to Kevon Grant. The touchdown seemed to wake the Rams up because a minute and 21 seconds later they hit paydirt with a 1-yard Makhi Bouldin touchdown run.

Just as the rain began to fall Jackson Gifford added the first of his three touchdown runs on the evening with a 4-yard plunge in the second quarter and three minutes later QB1 CJ Boze found a seam and outran everyone en route to an 84-yard touchdown for a 21-6 lead that held until halftime.

“The thing with CJ is last year as a sophomore he had deer in the headlights,” Commins said. “He was really nervous about trying to do everything instead of settling in to what he does. He matured to where he kinda just plays within himself and has his glimpses.”

The rain held off just long enough at halftime for the homecoming festivities to conclude before returning right as the second half started. Bringing with it the joys of handling a wet football.

The Rams opened the half with a drive to the Northwest 27 hoping to add to their first half lead, but a fumble halted them.

Northwest was stopped on fourth down at midfield, and again, Ross drove into Knight territory — only to fumble a second time. This time it was costly.

Running an option right CJ Boze was trying to avoid defenders and as he was about to be tackled two-hand shoved to ball towards Jackson Gifford. What he didn’t see was the Knights Owen Massung between them.

Massung stepped up into the gap, plucked the bar from the air, and scooted down the sidelines for an 85-yard touchdown, drawing the Knights to within nine points at 21-12.

“CJ had two bad reads in the first half.” Commins said. “I thought up until that point he had played about as good a football game as he could. I told him. I literally told him in the third quarter walking out, I said, ‘It’s either a give or keep quarter right now. We will let you know when you can pitch.’

“I’m hard on him, but I can’t get mad at him. He’s just trying to make a play,” Commins added.

Boze rushed 15 times for 197 yards and the lone touchdown, with 169 of those yards coming in the first half

“He told me it’s a give or a keep quarter,” Boze said. “And me being me, I tried to pitch it, make something happen, and it didn’t turn out good. I should have listened to him. I have to keep going. I can’t let my team down.”

And just 57 seconds later, Jackson Gifford scored on a 15-yard touchdown run set up by a 67-yard kickoff return from Mehki Bouldin — giving the Rams a 28-12 lead that they would add to.

Gifford added 181 yards on 14 carries to go with his three touchdowns.

Logan Lawson threw for 139 yards and two touchdowns. Kevon Grant gained 129 yards through the air and two receiving touchdowns for the Knights.

Northwest drops to 1-6 and 0-3 in the SWOC and hosts Mount Healthy next Friday.

Ross improves to 6-1 and 3-1 in the SWOC and will host Little Miami in a game that not only has conference supremacy but serious playoff implications.