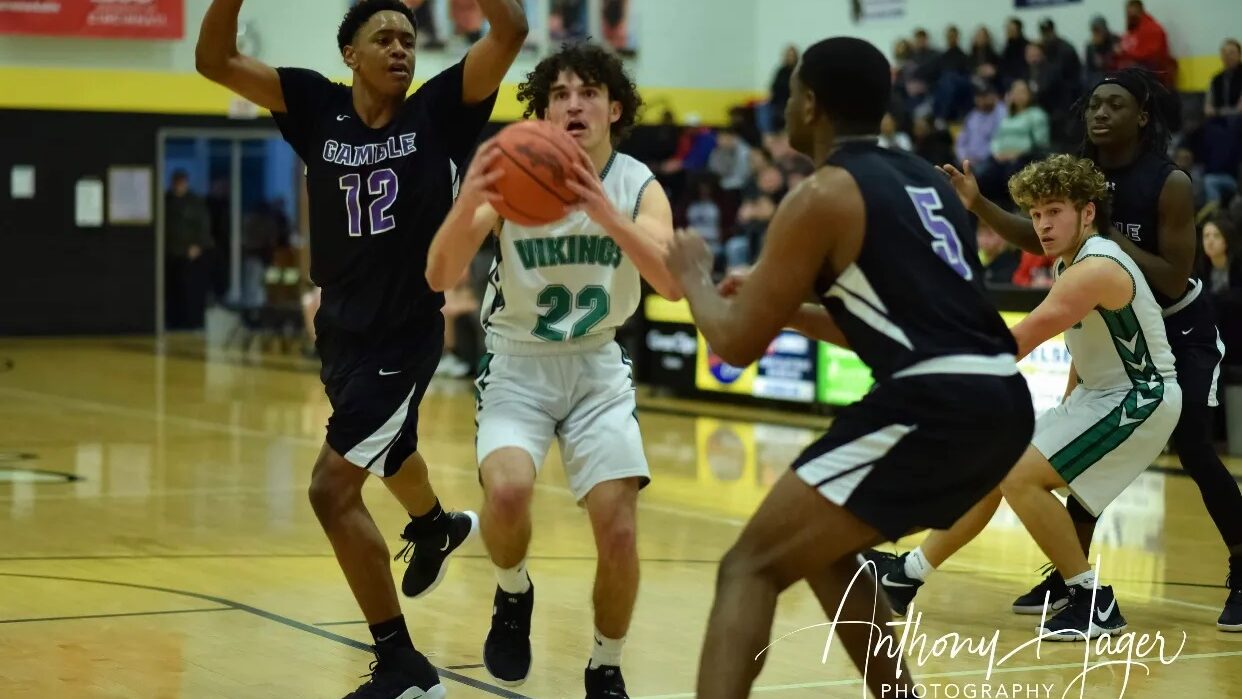 CLEVES — Jordan Robinette was immediately mobbed by the New Miami faithful and hoisted on top of some shoulders.

Robinette had just bucketed the game-winner at the buzzer that lifted the Vikings to a 48-47 Division IV sectional final victory over Gamble Montessori at Taylor.

“Coach called a timeout and we basically just drew up a play right there,” Robinette said. “They got me the ball, and I was looking for a foul, but I didn’t get it. So I just made it, and we won.”

With 6.3 seconds left to play and Gamble Montessori up on top 47-46, Vikings senior Ronnie Bowman flung an in-bounds pass to teammate David Cunningham — who then sent a touch-pass Robinette’s way near half court.

Robinette raced through the Gator defense before going up for a contested layup that bounced around the rim. The ball fell through, sending the packed New Miami stands into a frenzy.

That bucket sends the Vikings (16-9) to their first district title contest since the 2002-2003 season. They’ll take on Springfield Catholic Central next Friday at University of Dayton Arena.

Gamble Montessori’s Kaden Warner drove the lane and laid one in to give the Gators a 47-46 lead with 6.3 ticks showing in regulation.

“I didn’t pass it or shoot it,” Lee said of the play that was instantaneously drawn up during a timeout. “This is what makes coaching fun. When you’ve got some guys who know what they’re doing and can play, it makes coaching a whole heck of a lot of fun.”

Robinette’s game-winner didn’t overshadow a dominant performance by Bowman inside the paint and a stellar defensive show displayed against a much taller Gators squad.

Bowman tallied a team-high 15 points and a game-high 17 rebounds for New Miami, which has now won five straight. Robinette finished with 13 points, while Trey Robinette had 11.

Sophomore Kaden Warner had a big-time game for the Gators, notching 23 points.

“That’s a fantastic ball team we just played,” Lee said. “That Kaden Warner kid can play. He’s young just like our guys, so I’d imagine we’d be going up against him for a couple of more years.”

“That’s a very good team that we played,” Jordan Robinette added. “They’ve got some very good defenders I know that’s a fact.

The Gators marched their way back during an action-packed fourth quarter.

“We knew we had to go after every loose ball tonight,” Bowman said. “We weren’t going to let them come back on us and take it.”