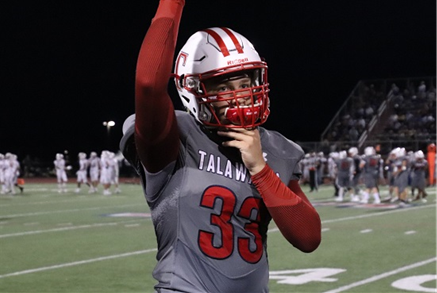 Given the fact that the second-year Brave mentor has a season under his belt, all eyes are on one thing now. And that’s making sure his players simply do their job.

“I honestly think our players are holding each other accountable,” said Volker, whose squad is looking to bounce back from a 2-7 performance. “From the start, it’s been a player-led culture. We’ve been preaching that since day one.

“Even though it was an interesting year last season, and we wanted to be more successful, the kids are showing up and putting in the effort,” Volker added. “That’s sort of been our stamp so far this year — accountability. All they want to do is become better football players and a better team.”

Volker noted the noticeable difference between his first year on the sidelines and now is the roster.

“When you go from fielding a team of around 40 last year to 60 this year, you’re able to put together new schemes on both sides of the ball,” Volker said.

Senior DJ Morris-Williams will see plenty of playing time on both side of the ball, according to Volker. He will do some work in the offensive backfield and some line duties on defense.

Sophomore Cale Leitch will be under center after getting more than enough reps as a freshman a season ago.

Senior linebacker Blake Detherage will call the shots on defense, following a second-team all-SWOC performance in 2021. Junior Caleb Dillhoff returns at linebacker as well after leading the Brave in tackles with 48 a season ago.

“It’s the brand of football that will set us apart. We want people to know when they play us,” Volker said. “We want them to know that it’s going to be an absolute battle.