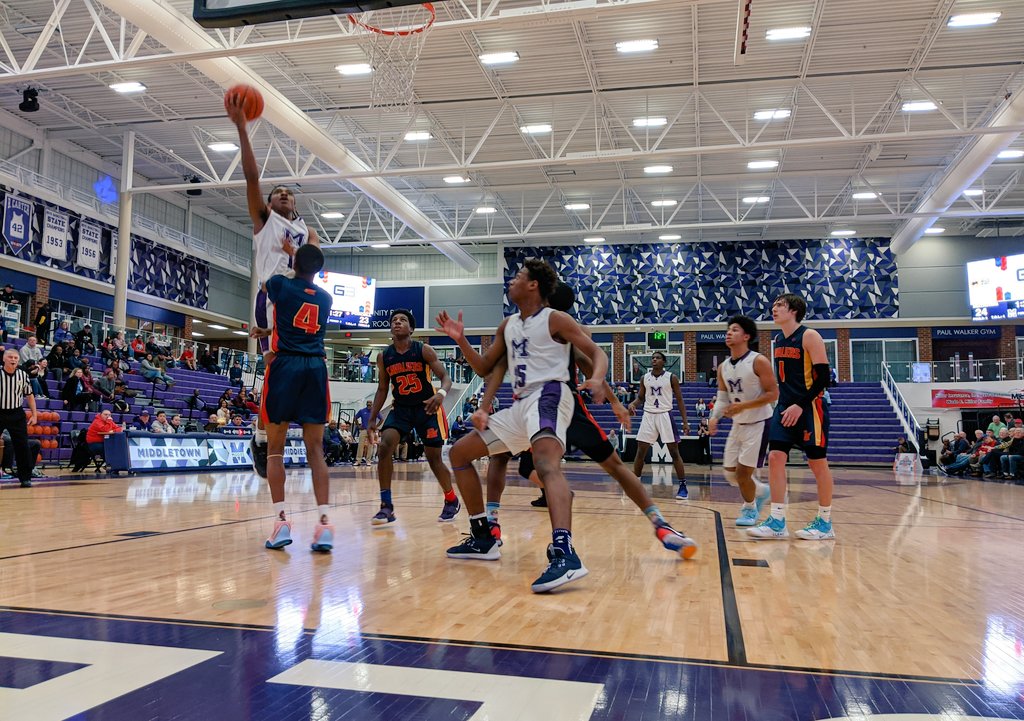 MIDDLETOWN — For the second-straight year, Middletown High School hosted the Midwest King Classic featuring a series of 12 games that took place on Friday and Saturday, Jan. 18-19.

The event featured several teams from the Cincinnati and Dayton areas and took place in the stat-of-the-art Wade E. Miller Arena.

“It’s a great experience for all the kids,” Middletown athletic director JD Foust said. “I think it’s great for our community. A lot of people from Middletown come to watch the games, so it’s exciting definitely.”

A couple of the teams showcased in the event were the Cincinnati Christian Cougars and Madison Mohawks. Both played their games on Sunday with Cincinnati Christian facing off against the Gamble Montessori Gators at 3 p.m., followed immediately by Madison taking on the National Trail Blazers at 4:45 p.m.

Cincinnati Christian entered Sunday’s competition with a record of 8-5 and looking to win its fifth in-a-row. The Cougars led for much of the game and although Gamble Montessori made an impressive run to get within three points in the fourth quarter, the effort wouldn’t be enough as the Cougars closed the door shut winning 57-54.

“When you play three games in a matter of six days it’s tough,” Cincinnati Christian coach Carl Woods said. “So, the fatigue started to kick in and we just had to grit it out.”

The Cougars were led by KJ Swain and Logan Woods. Both finished the game with 18 points and 5 rebounds each. Woods, however, received the honor of being named King of the Game, the event’s title for each game’s most outstanding player.

“Those two guys are definitely our bread and butter guys,” Carl Woods said of Swain and Logan Woods. “They run this team. The guys know how to look for them and get them the ball and when the ball is in those guys hands great things happen.”

Carl Woods was not only happy to come away with a victory, but he said he and his team enjoyed competing in the event and look forward to participating in the showcase in the future.

“It’s a wonderful experience,” Woods said. “We’re so happy to be a part of this event and look forward to many more.”

In the contest between Madison and National Trail, it was the battle of two 12-2 teams. Madison entered the weekend having won four of their last five, including a dominating 77-37 victory over Carlisle on Friday, Jan. 17. But the Mohawks knew the challenge they faced against the Blazers would prove to be much more formidable.

“We have so much respect for them,” Madison coach Jeff Smith said National Trail. “(Blazers coach Mike Harrison) is such a good coach. He did such a good job preparing his kids. We knew it would be a big game and a tough game and it turned out to be that.”

It was indeed a tough game. The two teams traded blows including a flurry of 3-point shots. Madison finished the game 7 of 19 from beyond the arc while National Trail converted 7 of 18 3-point attempts. The Mohawks were able to hang on after a late comeback by National Trail to win 59-54, improving their record to 13-2.

Madison was led by Grant Whisman, who finished the game with 26 points and 11 rebounds. He was honored as the King of the Game for his outstanding performance.

“We’re probably really spoiled because he just tends to do that all the time,” Smith said. “He’s just a tough kid. He plays tough, very selfless.”

The game opened with National Trail being charged with an indirect technical foul for one of its players slam-dunking during warmups. Madison made both free throws to start with a 2-0 lead.

Madison then stretched its lead to 12 points in the second half. During that run, Whisman converted a jaw-dropping, buzzer-beater from way beyond the 3-point line putting his team up 48-38 to end the third quarter.

“That’s why the kid is going to college for free for the next four years,” Smith said. “You make plays like that you get to go to college.”

And much like Carl Woods, Smith was honored that his team was able to participate in the event.

“We’re so grateful for the organizers to include us,” said Smith. “Martin Luther King Jr. is one of my heroes and it was a thrill to get to be a part of this.”

Middletown played in the event on Saturday night, taking down Purcell Marian 47-46. The Middies moved to 6-9 on the season.