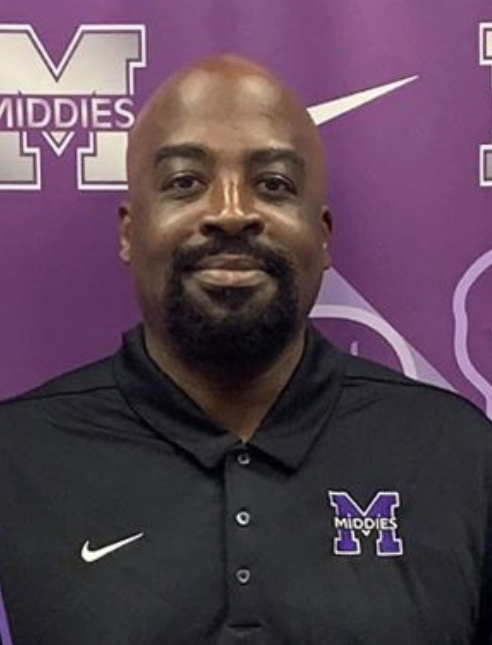 “I’m thinking to myself, ‘How can you not want to play here?'” Toliver said. “This place is better than every high school in the area and even some colleges. The vibe is going to be felt. People will feel it.”

Toliver was named head coach of the Middies girls basketball program after school board approval on Monday night.

Toliver has 26 years of coaching experience, including seven combined as a head coach at London, Springfield Emmanuel Christian and Xenia.

“I would like to thank our Superintendent Mr. Marlon Styles, Principal Mrs. Carmela Cotter and our Athletic Director J.D. Foust for entrusting me with leading the girls basketball program,” said Toliver, a 1992 Springfield South graduate.

“I am beyond excited and humbled to have the opportunity to build a program that will forever be linked with our players long after their playing days are concluded,” Toliver added. “Our mission is to strive to become 1% better every day in the classroom, as well as the basketball court. We want to build a ‘Community Program’ that will be the most positive and influential experience of all our players K-12.”

“I’m seeing this as an opportunity to play in one of the top 3 conferences in the state of Ohio,” Toliver said. “When you have to play the GMC twice in a season, it’s an uphill battle, but we will be excited about it. There are some juggernauts, and there’s nothing but respect for our league.

“The main thing is that we have to compete,” Toliver added. “At the end of the day, when the day is all said and done, the biggest thing I want to hear from opposing coaches is how hard we played from start to finish. We want to compete.”

The Middies went 5-18 last season. Middletown’s last winning season was in 2016 at 13-10. Toliver takes over for Russell Banks, who coached one season at the Middie helm.

“People are going to feel our vibe, and they will know that these girls are going to be ready to play,” Toliver said. “We just want our energy to spread and touch everyone in Middletown.”

“It’s an opportunity, No. 1, to build young lives in the community and most specifically in the Middletown community,” Toliver added. “No. 2, it’s to be a vehicle in a road map to success. We want to give them a taste of what it’s like to keep the Middie Magic going and to let everyone know that it’s real.”

“The bottom line is not to not change where you go, it’s building a consistent and positive direction,” Toliver continued.

“I am ecstatic about our hiring of Coach Toliver to lead our women’s basketball program,” Foust said. “He is the perfect fit for us and checks all the boxes. Toliver is a proven head coach with successful coaching experience during his career. He is well-respected for his knowledge of the game and knows how to develop players. Toliver is a great person that will relate well to his players, assistants, staff and fans. I can’t wait for him to get started.”

Toliver said he views this as a chance to build character for his future student-athletes on the court, and also scholastically.

“The one thing we want to do is challenge them in everyday life and in the classroom and get better every day in all aspects of life,” Toliver said. “We want to look totally different come January and February as a program, as a whole. We’re going to strive to get better at every drill and with our mindset. We will come to compete. Those are the aspects that I’ll bring to the table.

“I’m extremely excited to get into the gym, meet the girls and get this going.”