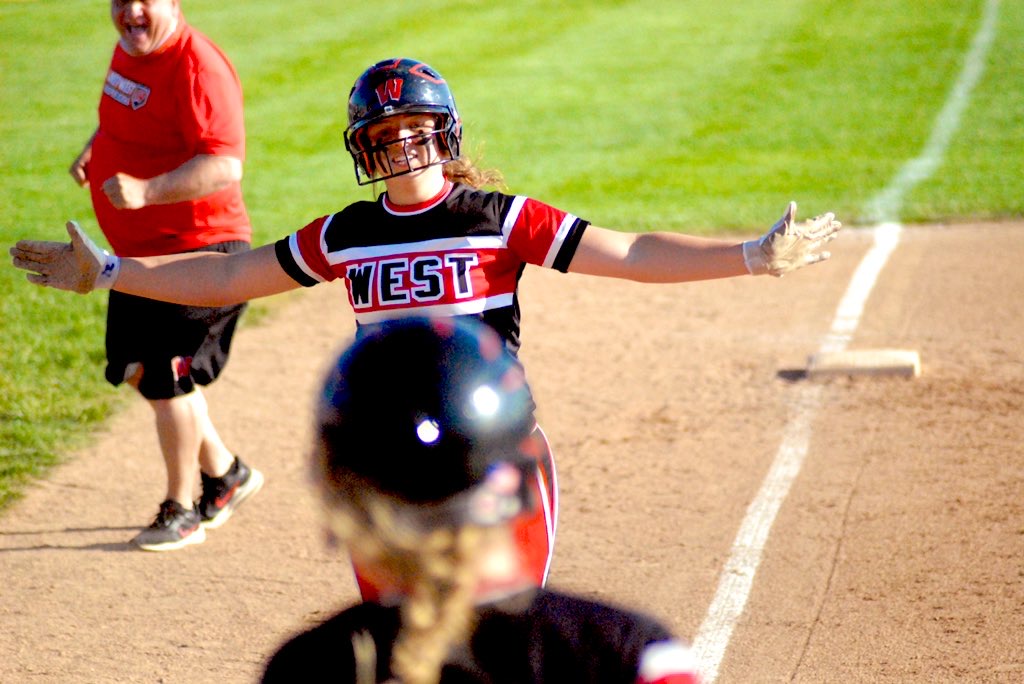 MASON — KK Mathis knew it hit the sweet part of the bat. The Lakota West High School junior also knew a softball wasn’t coming back into the field of play.

Mathis crushed a grand slam to build up some cushion for the state’s top-ranked Firebirds, and Lakota West got some defensive help to close out a 6-0 victory over host and Greater Miami Conference rival Mason on Monday.

“My mindset was just to try and get on, try and score somebody,” said Mathis, who had walked two times prior to stepping up to the plate with the bases loaded in the top of the fifth. “It was a two-run ballgame at the time, and I was just trying to make it a bigger lead for us to have some breathing room.

“I got 0-2 in the count, I was hoping to try and fight some pitches off, but she let one hang,” Mathis added. “I met barrel with it, and I just knew. It hit barrel really well. It was kind of an instant feeling.”

Mathis sent her 11th home run of the season into the wind and over the left field fence to blow open a 2-0 West lead that was sparked by a Kendall Forren sac fly scoring Belle Hummel in the first inning and an Ariah Peregrina solo homer in the fourth.

“It was just cool for us to come out here today and play as a team,” Mathis said. “To have a big win like this, it’s just awesome.”

Lakota West, which is 16-1 overall and 10-0 in the GMC, has won three straight after suffering its first loss of the season last weekend to Indianapolis Roncalli. The Firebirds sit atop the GMC standings.

Mason slipped to 15-5 overall and 11-2 in the GMC. The Comets are now two games back in the conference heading into the final two weeks of the regular season.

“This is a big win, it really is,” Firebirds coach Keith Castner said. “Any win in the GMC is a good win — especially when you’re playing a team like Mason. They’re always very solid. We hit the ball pretty well today. We had some good defense, a couple of mistakes here and there. But that wind kind of held up the ball on a lot of hits, for them and us. But we responded.

“I appreciate the way our girls played today,” Castner added. “I think we’re playing well, and we just have to keep doing what we’ve been doing.”

Hummel went 4-for-5 at the plate to lead the way for Lakota West. Mathis held her own in the pitcher’s circle, striking out 10 and only giving up four hits and walking just two batters.

“This is pretty big,” Mathis said. “They have some good ball players, and we knew we had to bring our A-game in order to come out with a win. It was a lot of fun.”

Lakota West took down Mason in the first contest at Lakota West 7-4 back on April 5.

Castner said there’s been a specific focus for the Firebirds since then. He noted that focus hasn’t gone astray either.

“We always talk about it before we go out on the field. We need to play hard and play with class,” Castner said. “That’s what we do. The girls know that between the white lines they have to play hard and they play with class. That’s going to get them a long way in life. To learn how to play as a family. You can control two things — attitude and effort, every day you get up. If you bring great attitude and great effort, you’re going to do well.”

Lakota West gets back to action today at home against Princeton at 5 p.m.