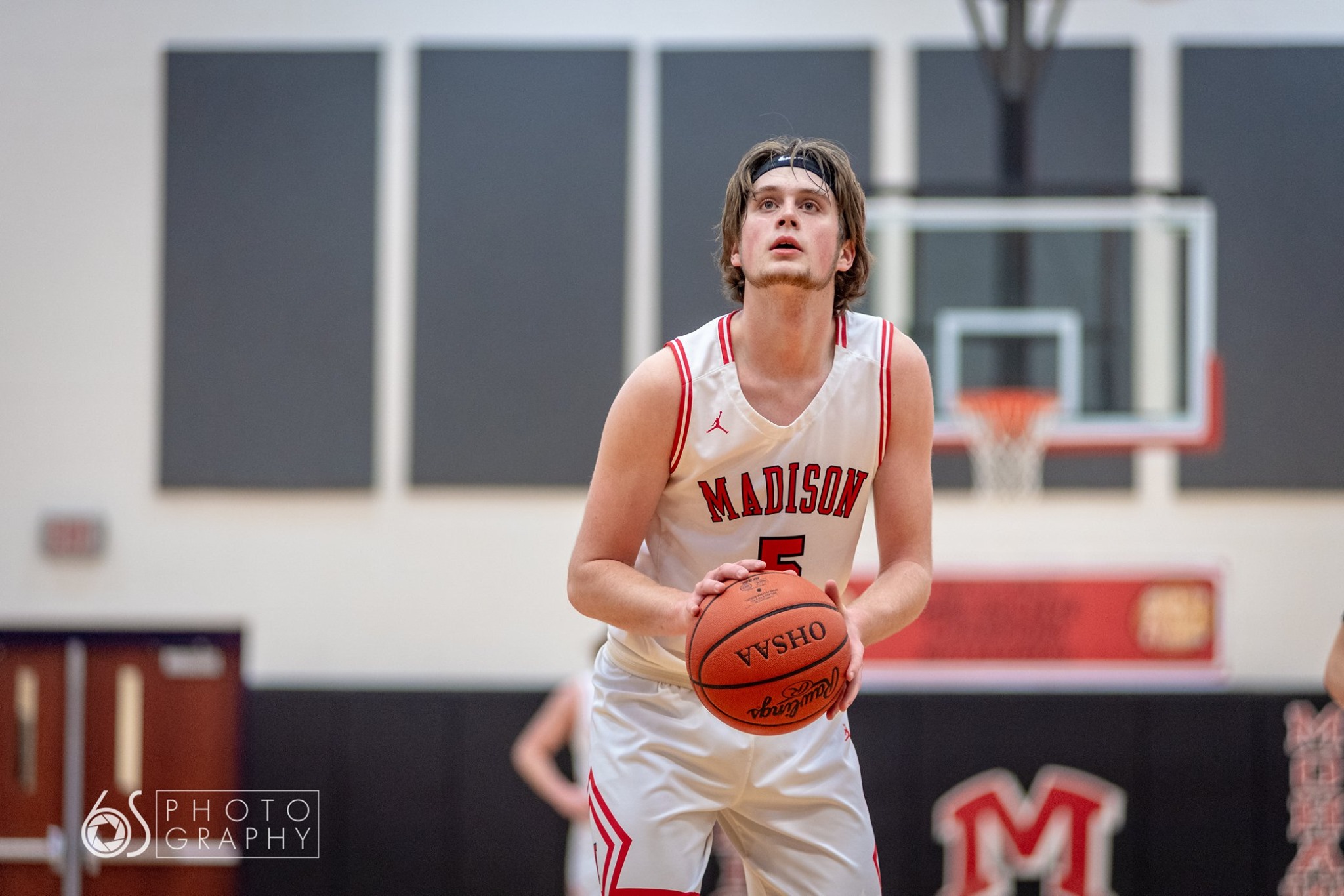 Madison's Grant Whisman is ready to take his talents to the next level. The senior will continue his academic and basketball careers at Cedarville University. PHOTOS BY AJ FULLAM/6SPHOTO.COM
Share
Tweet
Share
Share
Email
Comments

MADISON TWP. — Madison High School’s Grant Whisman sunk a free throw with 2:51 left to play against Brookville back on Dec. 14. It was a shot made with usual precision. Nothing but net.

“I think he’s one of the best shooters in the state, in his class,” Cedarville coach Pat Estepp said of the senior.

Whisman’s precise shooting and that specific shot from the line put him at the top of Madison’s all-time leading scorer’s list. He surpassed Nathanael Harney (2008) who held the record with 1,263 points.

Whisman’s accolades and pure talent shined during his stint as a Mohawk this past season. Along with earning Division III boys basketball All-Ohio First Team honors, he additionally was named the Southwestern Buckeye League Buckeye Division Player of the Year.

To boot, Whisman also finished his career on the Madison hardwood averaging a Butler County-best 25.7 points a game his senior season.

“The list can go on and on,” said Smith, who stepped down from coaching this past season after more than 30 years. “I’m basing this on what he was able to achieve. With what he’s accomplished in his high school career, I think he’s the best player to ever play at Madison.”

Smith said Whisman’s success was undeniably earned during his high school career. Not a moment was wasted.

And because of that persistence, Whisman will be continuing his academic and basketball endeavors at Cedarville this coming winter.

“He is such a great worker,” Smith said. “He would always shoot by himself. I’ve told him that he’s earned every bit of this. He’s always worked on his game. He did this for himself. If it wasn’t just me in that gym most nights, it would be both me and him in there.

“After coaching for so long, you value the kids who are really hungry for it,” Smith added. “You could tell Grant wanted to get better every single day. His hunger was off the charts.”

What comes with that hunger is a sense of humbleness. If you’d ask Whisman about any of his game performances, he’d be quick to deflect the attention to his teammates.

“It was sort of like a package deal with Grant. You’d get a humble kid who had a lot of hunger in him,” Smith explained. “He won’t like to talk about himself a whole lot. That’s just how the kid is.

“He knew he had the ability to be a great player,” Smith added. “And I think his humility is really a great thing. I think that jumps off the page to me the most about him. You can’t find much of that from kids at the high school level who hold themselves accountable, yet keep a narrow path forward.”

“When you’ve got a good group of guys around you, good things happen,” said Whisman, who led Madison in scoring all four seasons. “The guys who stepped on the court with me, they all helped create what we had.”

The Mohawks compiled a 60-13 record during Whisman’s last three seasons.

“We just gelled and played so well together,” Whisman said. “We had fun, and we had team goals. When you have fun and mix that with team goals, you find a way to win with your teammates.”

Whisman said Madison basketball helped shape the type of player he is today, crediting Smith, as well as his father.

“You look back and hope you were able to accomplish as much as you can,” he said. “I wouldn’t be having the chance to play at the college level if it weren’t for Coach Smith and my dad.

“I’m going somewhere I feel most comfortable with,” added Whisman, who noted that his parents, Dave and Mindy, both attended Cedarville.

Added Estepp, “Grant is a great fit for us and our culture. Just a natural fit. He’s going to be a great addition to our program. He’s got the skills, and we know that he’s ready to take those skills to the next level.”