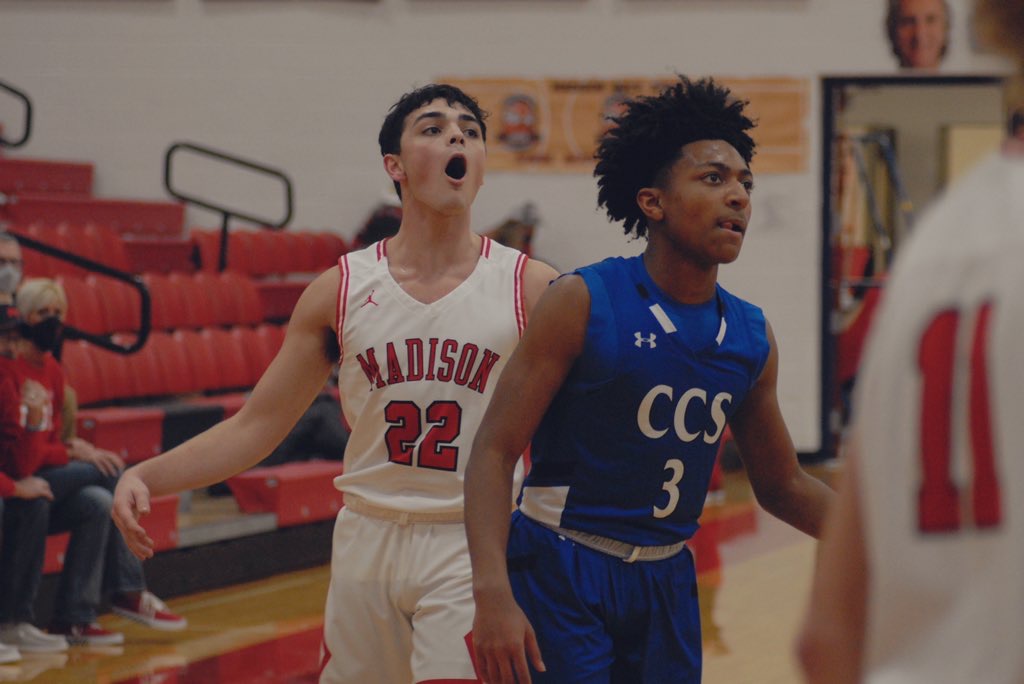 MADISON TWP. — Shane Richardson felt as though some weight had been lifted off his shoulders Tuesday night.

Four players scored in double figures for the Mohawks, who snapped a six-game losing streak with their 65-50 victory over the visiting Cincinnati Christian Cougars.

“There’s no doubt about it. I’m beyond happy, beyond happy for this program,” said Richardson, who is in his first year at the Madison helm.

It was Richardson’s first home win as head coach of the Mohawks, who moved to 2-6 on the season.

“This second win proved to be harder than the first one,” Richardson said. “I told these guys that this is all new to us and that we’re going to keep learning. Our plan at the end of the year is to be playing our best basketball.”

Cincinnati Christian got off to a 19-10 lead after one quarter, but a slew of Murphy 3-pointers just before the half brought Madison back into it.

“It feels good to finally get another win,” said Murphy, who scored 11 of his points in the second frame. “We’ve been scratching for it — fighting for it. We played as a team, we moved the ball and got good shots.”

The Mohawks, who matched a full-court press by the Cougars, went into the break ahead 33-30.

”This is the first time this year that we brought out our press,” Cincinnati Christian assistant coach Ben Gillens said. “I was really proud of our guys with our defensive intensity.”

Madison gradually put things away in the second half by outscoring Cincinnati Christian 32-20. The loss slipped the Cougars to 2-5 on the season.

“I think something that we will focus on is keeping our guys active and staying consistent,” Gillens said. “We’re a young program. We talk about metal toughness, and I hope that will carry itself over in a number of ways.”

Brogan Babcock had 16 points, Jesse Allmon had 14, and Roman Stanley had 10 for the Mohawks.

“We played so much better tonight,” Richardson said. “We had a good past four days of practice. We were able to get in here as a team and clean some stuff up. When we defend and rebound, we play well. I believe in my book everybody had a rebound tonight. When we score and rebound like that, we can be pretty tough to beat.”

Junior guard Matthew Cardwell had a hard-earned 16 points to pace Cincinnati Christian, which gets back to action at Cincinnati Country Day on Saturday, Jan. 2, according to the Miami Valley Conference website.

Madison travels to Ross on Saturday, Jan. 2, according to the Southwestern Buckeye League website.