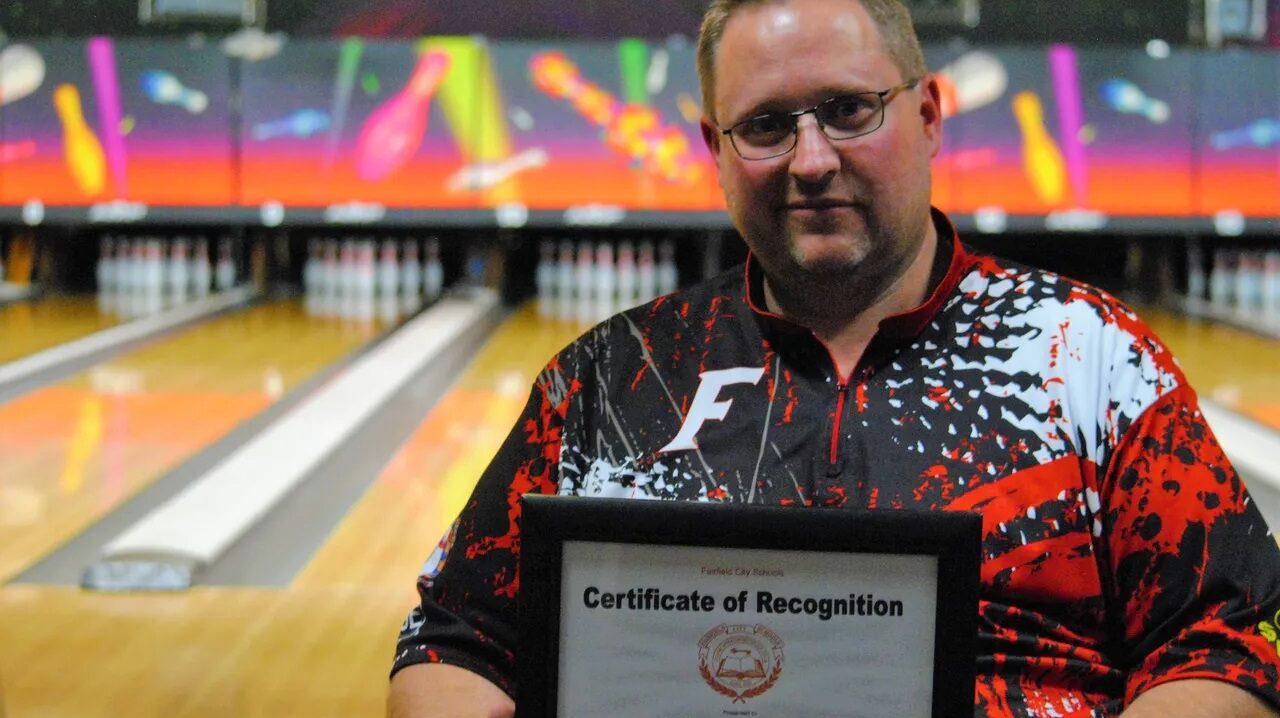 Fairfield High bowling coach Nick Glomb holds up a Certificate of Regocnition, an award he received after the 2003-2004 girls bowling team won the state tournament. Glomb says that award is his most prized possession. He recently retired from the Indians bowling program. CHRIS VOGT/BCHSSReport.com
Share
Tweet
Share
Share
Email
Comments

FAIRFIELD — Nick Glomb contemplated it multiple times before. He just couldn’t fathom the thought of giving up coaching a sport he devoted almost two decades of his life to at the prep level.

“Players just kept telling me to keep at it,” said Glomb, 40, a Fairfield High coaching staple for its bowling program for the past 17 years. “Even the younger ones kept telling me, ‘You need to hang around until my senior year.’”

That situation also came about more than once from his bowlers. But Glomb ultimately knew he had to look at the larger picture.

“A lot of people were privately reaching out to me, texting me and Facebooking me when they had a hunch that this was for real — ‘I can’t believe you’re hanging it up. You’re going to be missed,’” Glomb said while at the Game of Fairfield bowling alley, where his love for the sport began.

“It’s that kind of stuff that really tells you how much you mean to the program,” Glomb added. “It’s definitely hard. But it’s time that you’ve got to take care of your kids and your family.”

He also led the Fairfield girls bowling team to its prestigious state title during the 2003-2004 season.

But the most valued item on his list of accomplishments, Glomb said, is coaching three GMC Bowlers of the Year in Tracy Klapper (2004), Heather Scott (2011) and Meaghan Huffer (2019).

“You know things are going right when you coach a bowler to that status,” said Glomb, who was also inducted into the Greater Hamilton Bowling Association Hall of Fame in 2013. “Getting to coach a bowler of the year is just phenomenal. That’s what this is all about.

“It’s not about me. It’s always been about the bowlers.”

Glomb’s passion for bowling started when he was a youngster, and the interest grew stronger as time passed.

Bill Stewart and Carl Compton helped jumpstart the Fairfield bowling program, according to Glomb. But he said it was Norb Bosken who eventually opened the door for him to teach the game to high schoolers.

Bosken offered him the opportunity to coach the Indians’ program during the 2002-2003 campaign.

“Norb let me run with it,” Glomb said. “I still to this day give all credit to him with how things started for me.”

Glomb joked that he didn’t envision himself initially coaching outside of the Hamilton City School District. Afterall, he was a 1997 Hamilton graduate.

“But there I was, being offered a chance to coach at Fairfield. I am continually thankful to Norb for letting me take the reins and making the program what it is today,” Glomb said. “When I took over, I told myself I wanted to be the best coach I could be.”

Glomb said that first year was a struggle, though. The proper adjustments were made, however, and his bowlers started to buy into his system.

“I was trying pretty hard to get some sort of game plan down,” he said. “But every bowler made that so easy on me. And it just all fell into place from that point on.”

Things quickly changed the following season. They changed in the most pinnacle of ways.

Just two seasons into Glomb’s coaching career, he found himself in a position he didn’t quite expect to arrive so soon. But no one was complaining.

“Here we were — the girls’ team staring at an opportunity to win a state championship,” Glomb reminisced on that 2003-2004 season. “I couldn’t believe it. It was so surreal.

“That team was very, very good,” he added.

“I’ll never forget the conversation that I had with them before the state match started,” Glomb said. “They were telling me that they wanted to win it all. They kept telling me, ‘We want to win.’ I could see it in them.

“Everyone on that team knew that they had a role to play, whether they were a starter or not,” Glomb added. “They knew that they all had to support the team, and if they got playing time, they had to take advantage of it.”

And they did — by winning the only girls’ team state title in Fairfield history.

”Their mind was set on one thing and that was to get a state title,” Glomb said right after the state championship win 15 years ago. “They only had one goal. It was the senior’s last chance, which made them want to get it that much more.”

Klapper, one of Glomb’s bowlers who received Bowler of the Year honors, coined that time as one of the most memorable experiences she’s ever had.

“The years that I bowled, we had an amazing group to go along with an amazing coach,” Klapper recalled. “Bringing home that state title was an amazing feeling.”

Glomb credited the state championship run for giving him some fuel to make sure Indians bowling stayed the path of dominance.

And it has ever since.

Under Glomb’s watch, both the girls and boys teams didn’t register a losing season, aside from 2008 when the Fairfield girls team went 5-8.

“Nick has been a rock for our athletic department as our bowling coach,” Harden said. “He is both a motivator and promoter of kids. He truly has become synonymous with Fairfield bowling and is recognized as one of the best in this area.

“Nick has been incredibly successful having been named Coach of the Year on several occasions and taken both boys and girls teams to league, sectional and district success, and made multiple runs to the state tournament as well,” Harden added. “He truly cares about his kids and created a family atmosphere for the bowling team.

“I’ve appreciated Nick’s passion for the sport and for his kids,” Harden continued. “He has made it easy for me to be a big supporter of his and the program.”

Glomb admitted that bowling to some degree can be a sport that is overlooked at the high school level. But he said that was never the case when Harden became the athletic director at Fairfield 10 years ago.

“Mark is the best athletic director a coach could ask for to work with,” Glomb said. “He was a big fan of this bowling program. His support in how we did things was never in question, and I couldn’t appreciate that enough from him.

“Having the support from Mark was motivation alone to want to succeed every year.”

Glomb said his bowling coaching IQ increased throughout his career at the Fairfield helm, as did his instinctive ways.

“My senior year we were bowling districts,” Doran recalled. “I just drilled up a new ball so I was super eager to use it.”

Glomb had other plans for that ball — and Doran.

“I specifically remember telling him, ‘This isn’t going to be the right decision if you use that new ball,’” he said.

“When we started practice,” Doran said, “Nick told me to throw my old one.”

“Needless to say, it was the right call because I proceeded to shoot 707, 30 clean, and make it to state for the first time,” said Doran, who bowled as an individual at the 2014 state tournament.

“Nick saw the potential you had, and he wanted you to realize it,” Doran added. “I don’t think the program would still be a thing without his help. He did everything you are supposed to as a high school coach — and that was to make those kinds of decisions for us.”

Rebecca Ruberg, who bowled from 2008 to 2011, encountered a similar instance.

“Coach Glomb knew when upgrades were needed,” Ruberg said before joking. “With his knowledge and my mom’s pocketbook, they teamed up and surprised me with a new bowling ball that he knew would work best for me.”

Ruberg noted that Glomb even gave her his wife’s ball.

“Each ball had their benefits for different lane conditions, and Nick taught me how to use the right equipment to my advantage,” Ruberg said. “I wouldn’t have the gear that I have today without Nick.

“That’s the kind of impact Nick had on the bowling program for Fairfield — simply making it fun for the bowlers and treating us as family versus a job,” added Ruberg, the GMC’s leading bowler in 2011.

“That made us hungrier for a win, and we all know that made him proud.”

Glomb has soaked in that pride, indeed.

Now, he’s able to focus more on a couple of personal endeavors — his family of four and bowling a 300 for the 35th time.

“I’m still trying to teach myself how to be a better bowler,” said Glomb, who is participating in leagues at the Game of Fairfield.

“I’m loving the fact that I’m now starting to be able to really teach my own kids how to bowl as they grow older,” Glomb added of his children Keagan, 8, and Addyson, 6.

“My wife has been extremely supportive in my bowling ways. She’s been so patient and understanding,” continued Glomb, who has been married to his wife Andrea for 10 years.

“I think you can say I’ve rolled a strike so far. It’s been a great ride.”