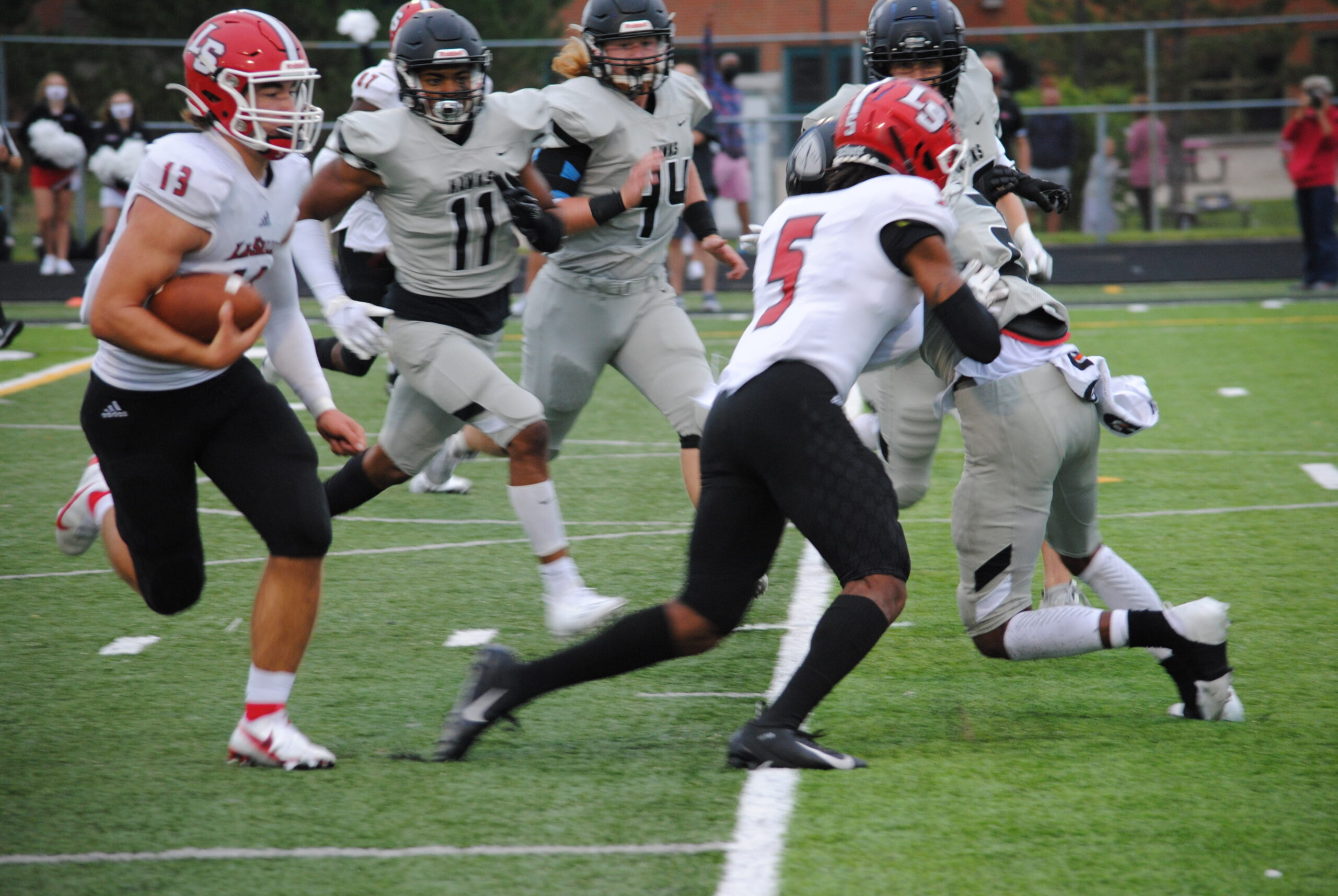 LIBERTY TWP. — Each Friday night in the fall, high school football teams must overcome several challenges on the quest to defeat their opponent. There are the other team’s star players, the officials and even the weather. Simply showing up on game day and expecting to win is not enough.

With all the obstacles already ahead of them, avoiding self-inflicted wounds is on every team’s list of keys to victory.

For the Lakota East Thunderhawks, on top of facing a tough opponent, they were unable to get out of their own way — turning the ball over three times, as they fell to the LaSalle Lancers 35-13 on Friday.

“I thought we were prepared, we just turned it over three times, and they scored,” said Lakota East coach Rick Haynes. “It was the difference in the game.”

The Lancers jumped out to an early 21-0 lead and appeared to have the game well under control. But the Thunderhawks weren’t ready to concede.

Towards the end of the second quarter, Lakota East managed to get on the board for the first time with a TD pass from TJ Kathman to Andy Payton.

Then, after forcing the Lancers to punt, the Thunderhawks orchestrated another successful drive finished by another TD pass from Kathman, this time to Charlie Kenrich. The score was 21-13 and it appeared to be a more competitive game than many might have originally thought.

In fact, LaSalle coach Patrick McLaughlin expressed that the final score was not indicative of how competitive the game was between the two teams.

“The game was closer than the score indicated,” Mclaughlin said of his team’s victory. “Anytime you play the option, especially one coached by Rick Haynes, they control the ball, they’re very well coached. We knew it was going to be a battle. We got out early and forced them to throw the ball in the second half.”

While Lakota East tried to climb back into the game by dialing up more passing plays in the second half, it was unable to mount a comeback.

On their final possession of the game, the Thunderbirds turned the ball over for the third time after tossing an interception to a waiting defender in the end zone. The Lancers maintained control of the ball for the remainder of the game and eventually took a knee to run out the clock.

And even though the loss brings the Thunderbirds to 0-3 on the season, players are confident if they avoid mistakes such as turnovers and penalties, they can compete with anyone.

“We’re hurting ourselves,” said Kathman, who finished the game with 100 yards passing and 2 TDs. “I don’t think these teams are really better than us. We just have trouble with penalties and stuff like that. But we can clean it up.”

The Thunderhawks will get the opportunity to clean up their mistakes when they travel to Princeton to face the 3-0 Vikings in Week 4.

“We just have to keep working,” Haynes said. “I mean there’s no magic wand. We’ve just got to keep going and eliminate those mistakes that are keeping us from being successful.”