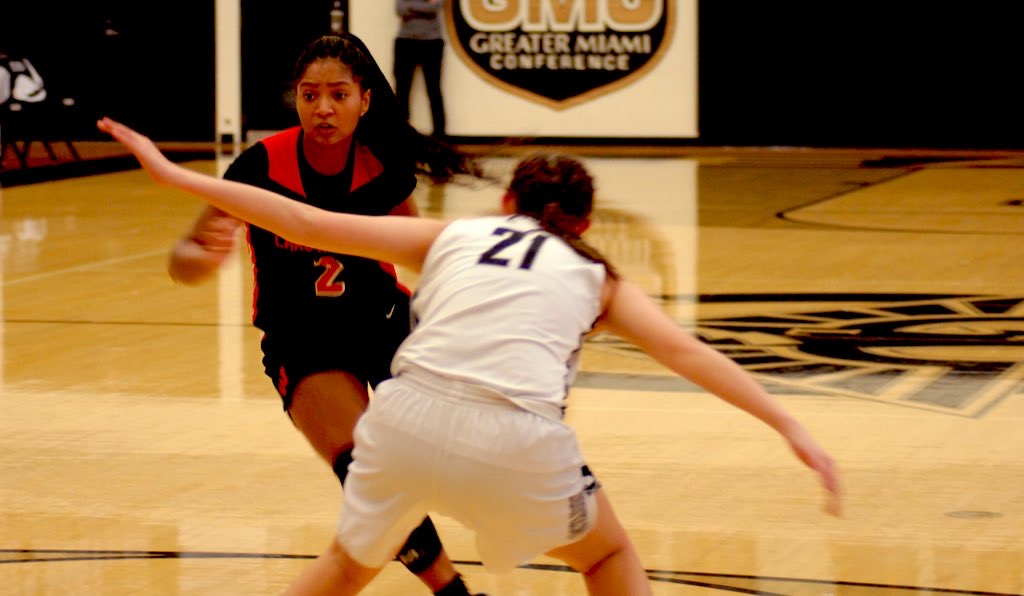 The Thunderhawks answered the Firebirds’ initial run behind Savannah Smith’s 9 points and pulled to within 16-15 after the first frame.

Lakota East took a 27-26 lead into the locker room at halftime and maintained either a lead or a tie until the four-minute mark of the third when Elizabeth Key hit a 3-pointer, stole the inbounds pass, and dished it off for a layup to Beri Ngwa — breaking a 31-31 tie and giving the Firebirds a lead that East would not match.

“Basketball is a game of runs, and I just stopped one with that timeout,” Wallace said to his girls during a second-half timeout following the Key-led run that extended the Firebird lead to nine points.

“It’s been a long time since we lost a game, and we have to learn from a game like this. This is a win in the scoring column, but it’s also a wake-up call,” said Lakota West coach Andy Fishman, whose Firebirds have now won nine in a row. “We have to be more disciplined defensively, and we’ve got to be more physical. Our rebounding was poor, and we missed a lot of easy shots. I’ve got to give East credit — they were well-prepared and they were confident. I think Dan did a nice job of junking up the defenses.”

Containing Lakota West’s Chance Gray, the leading scorer in the GMC, was paramount for Lakota East. Holding the junior to 15 points — well off her 28-points per game average — kept the Thunderhawks in the game.

“Chance had five baskets, she only had one 3. Leah Abribat had two baskets and Flores had one basket,” Wallace said. “That’s what we were trying to do is limit those big 3-pointers, and I think we did that. I mean, Chance is going to get 15 on her own. She’s a tremendous basketball player.”

The Firebirds made four free throws in the last minute, and the closest the Thunderhawks would get was the final 6-point lead that West held until the end.

“Credit to Leah Abribat to knock down all four of her free throws, and Chance hit her free throws,” Fishman said. “Molly Grace was a workhorse for us. She did so many things that might not always come up on the stat sheet, but she was scrappy, and she was smart.

“Liz Key gave us some great minutes off the bench — I appreciate how she’s just ready,” Fishman added. “It’s kind of ‘be ready and your chance will come.’ When we call her number, she comes in and delivers. But we have to do better.”

Savannah Smith paced the Thunderhawks, and all scorers, with 19 points. She added nine rebounds and and three blocks.

Gray led the Firebirds with her 15 and added seven rebounds, three steals and three assists.

The Thunderhawks drop to 4-8 on the season and 4-4 in the GMC. They will travel to Oak Hills on Friday. Lakota East has lost six out of their last seven games.

The Firebirds move to 10-2 on the season and 8-2 in the GMC, as they host Circleville on Saturday in the Journey to the Tourney. Emily Doerman put in 11 points, and Grace and Abribat each had 10.