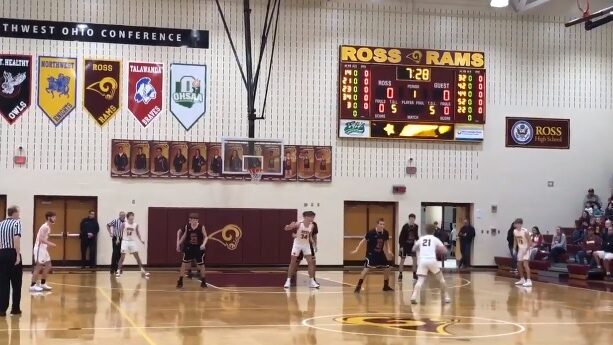 ROSS TWP. — The Ross High boys basketball team’s most dangerous scorer got back on track Saturday night, which was key in the Rams’ outlasting of East Central.

After scoring a combined 12 points in his last two games, senior guard Cole Gronas led Ross with 22 points — 12 of those coming from beyond the 3-point line — and the Rams topped the Trojans 68-65.

“My shot was off, I couldn’t hit anything, but I always shoot better at home,” Gronas said. “We’ve just gotta play how we play, and if we do that we’ll win games.”

Ross junior Max Stepaniak added 16 points, 10 coming in the first quarter. It took some adjusting by the Trojans to slow him down after a hot start.

“The slip was there, the big man kept overplaying us, and Sam (Nunn) found me everytime,” Stepaniak said.

“We have to continue to get better, and use this as a learning experience,” Lane said. “We’re tough to guard offensively, but on defense we’ve got to get better. If we continue to lock into the scouting report we should be able to put some wins together.”

East Central junior Luke Collinsworth gave the Rams fits in the paint, leading the Trojans in scoring with 25.

“We were letting it get into the post too easy, but a lot of his points were off offensive rebounds,” Lane said. “He just did a good job, he’s a big, physical, strong kid. He’s a handful, very skilled.”

The Rams played aggressive defense, putting pressure on the ball whenever they could. Capitalizing on points off of turnovers gave Ross the momentum at the beginning of the game.

East Central was able to grab hold of the lead 50-47 going into the fourth quarter, but foul trouble spelled disaster for the Trojans. Ross was able to take advantage of Collinsworth being off the floor for close to two minutes late in the fourth quarter. Committing his fourth foul with 4:16 remaining in the contest.

The game came down to one last offensive possession for the Trojans. Trailing by three with 8.9 seconds remaining, the Rams defense held up, forcing a contested 3 that was missed by AJ Messmore, locking up the win.

“It shows a lot of what our team is about as far as their mental toughness, their grit, and their attitude,” Lane said. “We got down, and a lot of teams can fold in that situation after being up the whole game, but we did a good job of buckling in.”

The Rams (3-1, 1-1 SWOC) will play their third conference game on Tuesday night at home against Mt. Healthy, a 7 p.m. tipoff.