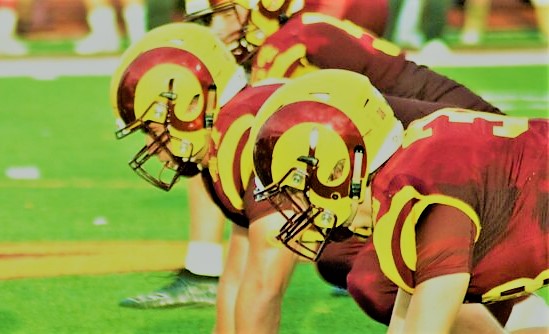 HARRISON — The Ross High football team is back.

Casey Redemeier’s two interceptions and Jackson Gifford’s five rushing touchdowns propelled the Rams to a 49-35 win over the Harrison Wildcats on Saturday night.

The Rams have now won three in a row. The game between the Southwest Ohio Conference rivals was selected for the Skyline Chili Crosstown Showdown. And a showdown it was.

“We just had to keep fighting,” Ross coach Kenyon Commins said. “I told the guys there at the end that the mark of a good man is how you act in adverse situations, and if they can rise to the challenge. And by gosh they did.”

Ross scored first when quarterback CJ Boze finished an 80-yard drive with a touchdown run at the goal line. Harrison running back Cam Herring tied the game with a 2-yard run of his own.

On the Rams’ next drive, Boze and company were in position at the Harrison 17 yard-line. Boze ran up the middle to the Harrison 7-yard line, but Harrison’s Gavin Moore stripped the ball and recovered the fumble to end a chance for Ross to extend the lead.

Ross responded on its next drive. Gifford’s 26-yard run from Harrison’s 40-yard-line set up the running back’s 1-yard touchdown run to tie the game back up at 14. The two teams wouldn’t stay tied for long. Young created more magic on the next drive combining for 87 total yards leading to Cam Herring’s 2-yard touchdown run to give Harrison a 21-14 lead heading into the half.

Ross tied the game at 21 after Gifford ran all four snaps, ending with a 51-yard touchdown up the sideline.

Harrison’s next possession provided some drama. The Wildcats were hit with a holding penalty that significantly played in favor of Ross. On fourth-and-21 at their own 49-yard line, the Wildcats gambled big time. It paid off though when Young threw a 31-yard pass to Diesman between two Rams defenders to extend the drive. Young tossed a 17-yard pass to Doerflein for the touchdown and the lead.

Then Gifford scored a touchdown to tie the game at 28 with seconds left in the third quarter.

Harrison scored on the first drive of the first quarter after Young who finished his night with 416 yards of total offense and 3 total touchdowns for the 35-28 lead.

Ross tied the game with a Gifford touchdown. Harrison got the ball back with 6:05 left in the fourth quarter and an opportunity to chew up clock and score, but not until Young threw the interception to Redemeier to end the drive and any hope of going ahead.

Boze scored on the Rams’ next drive, extending the lead. Redemeier got his second interception of the game, sealing Ross’s first win against Harrison since 2012.

“I’m proud of the defense tonight,” Ross coach Kenyon Commins said. “It was a bend or don’t break night.”

“Getting a win tonight fulfilled our night,” Gifford added.

Ross didn’t run a single pass play. Gifford rushed for 210 yards and his five scores, while Boze ran for 136 yards and two scores.

Young tossed for 282 yards, two TD passes and two interceptions. He also ran for 134 more yards and had a rushing TD.

Ross (3-1) hosts Edgewood next Friday, while Harrison (1-3) travels to Northwest.