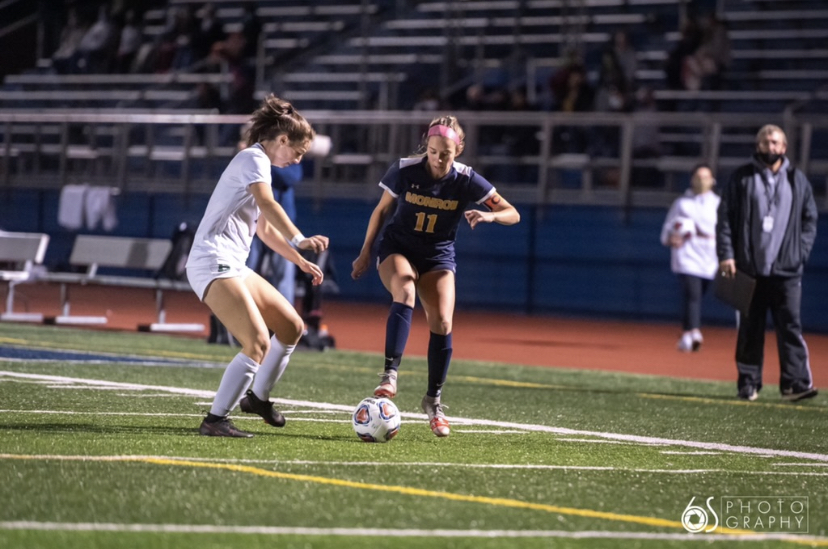 “Anything to put the ball in the goal,” the Monroe High senior midfielder said.

Gallagher tapped in a loose ball off a corner kick into the back of the net with 11:11 remaining in the first half, and that goal held up in the Hornets’ 1-0 Division II regional semifinal victory over Badin.

“Brooke Frazier, she had a corner kick, and we got mixed up with a bunch of people,” said Gallagher, who donned the captain “C” on her upper sleeve. “We got some deflections, and the ball found its way in front of the net. I just tapped it in.”

Gallagher’s sixth goal of the season advances Monroe to the D-II regional finals against Oakwood (12-4-3), which knocked off Bishop Hartley 2-0, at Hornet Stadium on Saturday at noon. Monroe beat Oakwood twice in the regular season, both were 4-0 wins.

It’s the second year in a row the Hornets have reached the regional final. They fell to Alter 2-0 last season.

“We played a better second half than the first half,” Badin coach Joe Martin said. “I’m proud of the girls this season. We came out from one of our regular season games earlier in the season, and they were a little down. We talked about it with them, and we had a couple conversations about what it was that they wanted to leave legacy wise for their teammates.

“But you’ve got to congratulate Monroe,” Martin continued. “They came out, they wanted the game and worked hard as a team.”

Monroe owned the majority of the time of possession and only allowed one legitimate shot on goal in the first 40 minutes. Badin’s chances were there in the second half, but Monroe’s defense proved superior.

“We have a big senior class full of leadership,” Martin said. “They were the ones who did all the coordinating and communication when it came to certain things. They did a great job. Every time you get a big senior class, it’s always the type of legacy you want to leave for the younger players. I believe they left a legacy to fill for next year.”

“The team that was going to win was the team that wanted it more,” Williams said. “We’ve said it point blank, ‘Who has the most heart? Who wants it more? Who’s going to make the most of every opportunity?’ Offensively and defensively, I think we did that.”

”This feels really good,” Gallagher said. “With this bring my senior year, I’m always thinking that every game could be my last. I just don’t want that to happen. So I’m just trying to leave it all out there.”