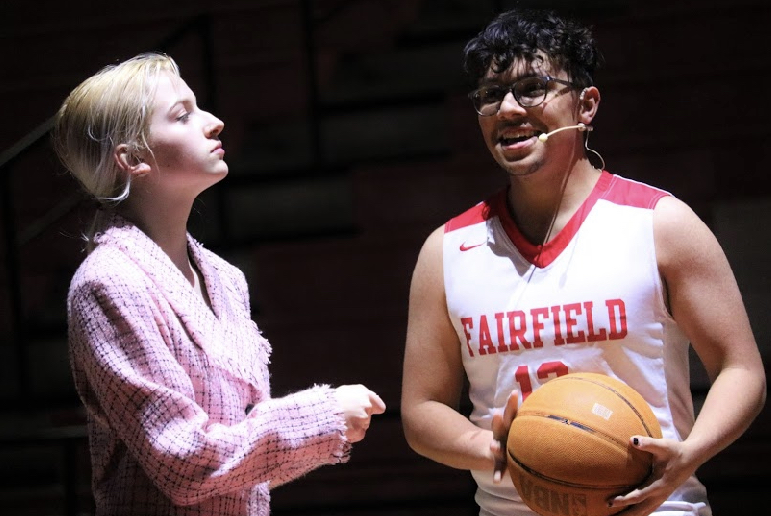 Back in November, Mindy Reed had a vision of bringing the Fairfield High School community together. The longtime Fairfield teacher saw an opportunity to mesh performing arts with athletics with marching band with class council, and many other clubs.

That vision will come to fruition starting tonight when the school’s drama department — along with members from numerous different organizations — is set to perform the one-act play ‘High School Musical’ in Fairfield Arena through the weekend.

“It all started simply by trying to find a show that would work within the constraints of Covid. We wanted to find a way for the show to be transferred from the stage into an arena setting,” Reed said. “High School Musical was a great option because many scenes take place on a basketball court, and in a high school.

“I realized I wanted to find a way to showcase as many of the amazing things Fairfield has to offer and the incredible students who are the heartbeat of our school,” Reed added. “There were so many things that were taken away from them in the past year — no student sections on Friday nights to watch the football team, marching band and basketball teams, to no dances, parades and many other things.

“I wanted to celebrate everything they love, and include as many of them as possible while we did it.”

Reed, who teaches French and is the assistant director of the theatre arts program at the school, noticed the lack of opportunity for students to soak in an environment most at Fairfield had cherished prior to Covid. So, she approached Fairfield athletic director Aaron Blankenship with an idea.

“Without hesitation, I saw this as a great opportunity for us to come together as a school with an hour and a half production to showcase the great things that are happening on the courts, the stage and the classrooms,” Blankenship said. “This is a year we haven’t been able to showcase the things we have here at the school like we’re typically able to. It’s been difficult to connect the dots in a year full of adversity, but Mindy has done a great job of making us forget all of it and bringing the entire school together through something like this.”

Planning for the one-act production began in November and prep officially started in January.

“I’m sure I’m missing some, but that’s a decent amount,” Reed said. “Of course, there’s also the members from the men’s basketball team as well. We’ve got to recognize our GMC championship basketball team on a community-wide scale, too”

Reed said the performance will include cameo appearances by teachers, administrators and staff members, “which was fun for them and the students. We also ended up embracing the challenges of performing in this venue, and cast, crew and production team found new and creative ways to put on a show where the audience could be seated all around the ‘stage’ and without typical sets, lights and sound.”

With capacity limits still set in place, performing ‘High School Musical’ in the main arena was a no-brainer to Blankenship. And Reed was excited to get the nod to move forward with the project.

“When we’re used to filling up an arena full of basketball fans, only selling a certain amount of tickets — this makes me excited to be able to bring something like this to our community,” Reed said. “Theatre was only 15 percent capacity. So that was out of the question. With the arena having that open concept, we’re happy to have the opportunity to sell up to 850 tickets for this.”

Reed said while the plan has been adjusted more than once since prep started months ago, she’s ready to see the final outcome with the first showing at 7 p.m. this evening, Thursday, April 22.

The show had an “accompaniment track for the music, which was the next best option. I really miss the pit orchestra, but I’m happy that some of them were able to join us onstage at least as cast members.”

Reed noted that as a 24-year teacher, she felt this past year to be difficult for not only students, but for administrators as well. And this performance, she hopes, will shed some positivity and change life’s direction in the high school scene.

“This entire year has made me sad, but we’ve got to use this as an opportunity to come together,” she said. “Our kids have missed out on a lot of things. But this is one thing we wanted to make sure they weren’t going to miss out on.”

“Mindy pitched the idea to me, and with her obviously being a great ambassador to the school, we thought it was a great idea to do exactly that — bring everyone together as a unit,” Blankenship said. “She’s taken on a huge task with this. But if there is anyone who can do it, it’s her.

“This is a great thing for Fairfield, from the vision to the casting and the creative ways to get the entire school involved.”

Tickets: Open to the public; purchase tickets at bitly/FHSDramaTix.