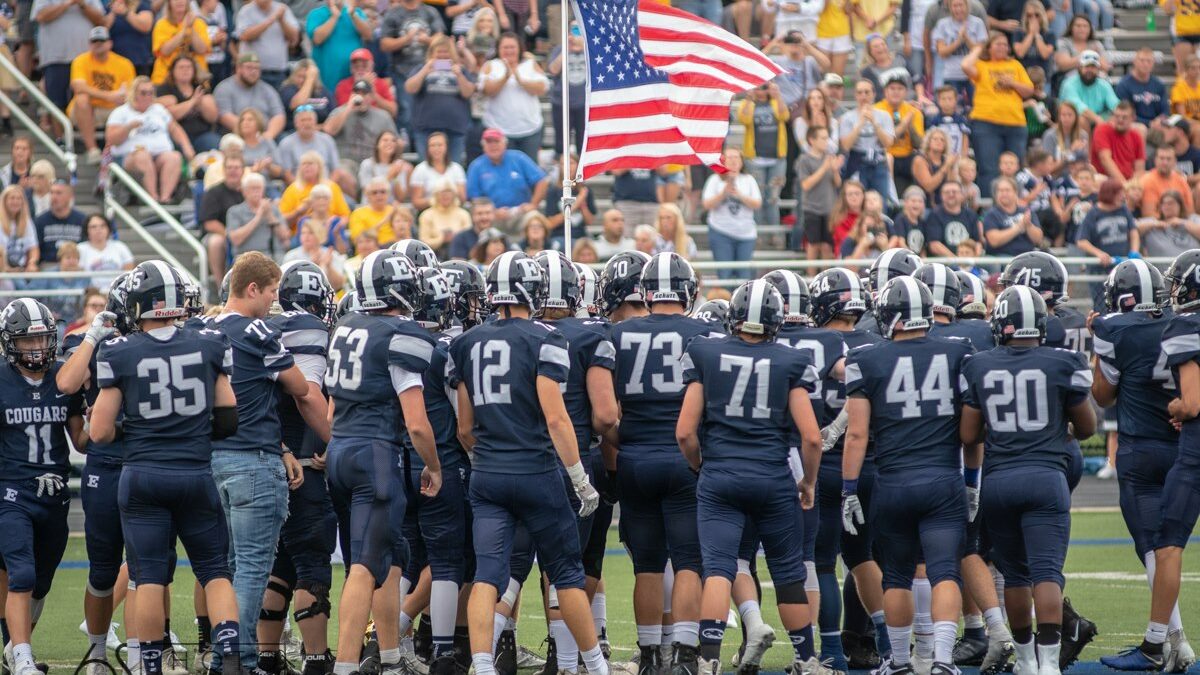 FRANKLIN — In a game where very little came easy, the Franklin Wildcats did just enough to muscle past a stubborn Edgewood Cougar squad and claim a 2-0 record, by virtue of a 20-10 win last night at Atrium Stadium.

And with wins over Edgewood and Madison that are likely to give Franklin a slew of second-level points as the season goes on, the Wildcats present themselves as an additional obstacle to Ross in the Division III playoff hunt while they’re at it.

Franklin’s defense was well-prepared to stop the bread-and-butter of Edgewood’s offense: the running game. Edgewood’s passing offense was still capable of moving the ball, but the Cougars had a hard time getting comfortable offensively.

After a three-and-out that involved three runs after a holding penalty, Edgewood was forced to punt and pinned the Wildcats deep. Franklin fumbled on a pass completion, and Dylan Polisini pounced on the ball to give Edgewood their best field position of the game.

On a 3rd-and-long, Edgewood quarterback Anthony Scott connected with Cymeon Gary for a 28-yard touchdown pass — a perfectly thrown ball that floated over the biting safety.

Edgewood took their first and only lead of the game, 7-0.

Franklin would tie the game up as the first quarter segued into the second.  Driving into Edgewood territory, the Wildcats opted to go for a 4th-and-4.

Quarterback Braden Woods threw the pass slightly behind Ryan Russell on the crossing route, but Russell adjusted magnificently, reaching back to make a one-handed catch and pick up the first down on the run after the catch.

A Braden Woods scramble gave Franklin a 1st-and-goal inside the 1 on the last play of the first quarter, and then Woods punched it in on the first play of quarter number two. Franklin kicker Bryan Thacker added a 36-yard field goal before the half to give Franklin a 10-7 halftime lead.

Edgewood had their best offensive drive of the game at the end of the third quarter, balancing run and pass, picking and choosing their spots for the safe passing game to move the ball, but showing enough run to keep Franklin’s defense honest.

Edgewood converted a 4th down on the drive to put them inside the red zone, but the drive stalled, leading to a Jonathan Testas 25-yard field goal as time expired in the third.

Franklin had the better of play in the fourth quarter, led by Braden Woods’s left arm and timely scrambling to get into field goal range twice.  Bryan Thacker pulled a 36-yard field goal wide left on the first of these drives, but Thacker was given a chance at redemption on the next.

Thacker’s 35-yard field goal, kicked from nearly the identical spot on the right hashmark as his previous miss, put the Wildcats up 13-10 with three minutes remaining.  Edgewood quarterback Anthony Scott was intercepted while rolling out to his left on the very first play of Edgewood’s next drive, a 30-yard pick-six by Franklin’s Aiden Kinser. Logan Willis added one more Franklin interception on a 4th down desperation halfback-pass, and the Wildcats completed their statement of a 2-0 start.

Franklin will look to collect more wins over Xenia and Monroe in the next couple of weeks, which could set up a dandy of a Week Five matchup with Bellbrook, should both Franklin and Bellbrook avoid the upset-bug.

In the meantime, Franklin will collect second-level points from every Madison and Edgewood win that takes place over the next eight weeks. Even though the OHSAA doesn’t release the official Harbin ratings until after Week Four, the Wildcats would be sitting at #2 in Division III, Region 12 currently, sandwiched in between Wapakoneta and Alter.

Edgewood will look to recoup next week against an 0-2 Badin squad that is also desperately in need of a win to get their season on track.  That game is scheduled for 7 pm next Friday at Fairfield High School.

Joel Sackenheim is a contributing writer for The Report.