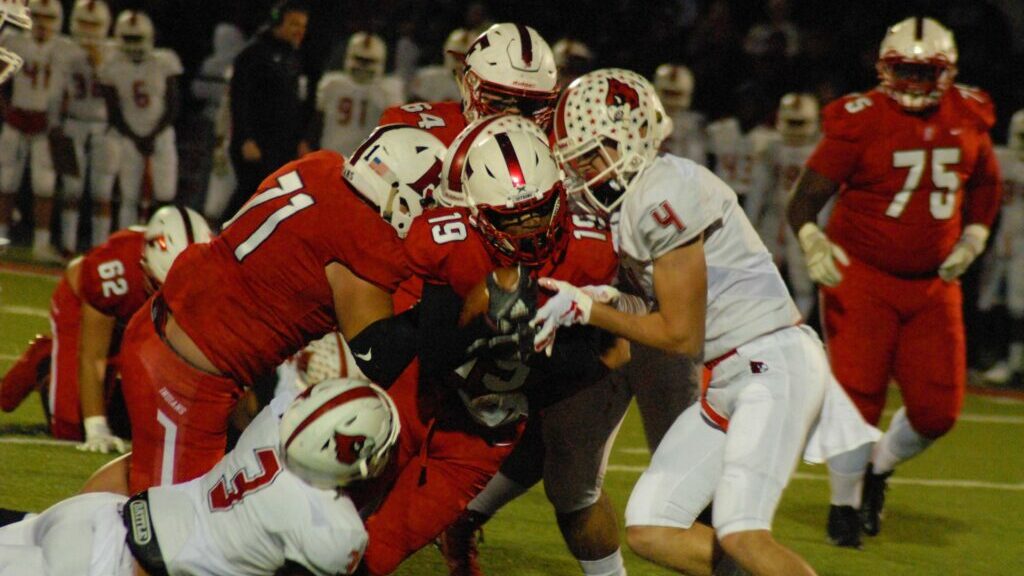 “It’s about all the guys that played here before us,” Cutright added. “I just couldn’t be more proud of them. So happy. That’s a great team over there. Fairfield is a great team, great athletes and they fought. We’re happy to win.”

The Cardinals combined with the Fairfield Indians for 429 yards of total offense, and the GMC’s top two defenses shined in an edge-of-your-seat, bend-but-don’t-break battle of wills.

Yards were hard to come by for both teams.

Fairfirld methodically drove down the field on the opening drive, eating up almost eight minutes in the process before Deshawn Pace stepped in front of a Sawiaha Ellis pass and returned it to the 37. That set up Cameron Ott’s 32 yard field goal to give Colerain the early 3-0 lead.

On the ensuing possession, Fairfield star running back JuTahn McClain went down with a left leg injury. While the drive would result in an Ellis 1-yard touchdown plunge, the Indians’ star player was still on the training table.

“Obviously he wasn’t 100-percent and that really hurt us,” Fairfield coach Jason Krause said. “But I thought we battled without him.”

The Indians did battle to a 7-3 halftime lead.

After initially going down, McClain came back for the final 1:23 of the first half, but he carried the ball just once and was more garland on the tree than the star on top that he normally is.

“You know I think we had two great defenses going at it and it did hurt them I’m sure (losing McClain),” Cutright said. “Really hard fought on both sides of the ball and it could have gone either way.”

Five seconds before the start of the fourth quarter, Freddie Johnson plunged into the endzone to tie the game at 10-10.

On the ensuing kickoff Jayden Mayes took the kickoff 49 yards to the Colerain 31 setting the Indians up with great field position.

During the ensuing drive, Colerain stopped the Indians on fourth-and-goal at the 2-yard line, foreshadowing the defensive conclusion that would come.

A wide-left, 37-yard field goal attempt by Cameron Ott sent the game to overtime and the defense on both sides shined. Again.

Colerain quickly punched the ball in during their opening overtime possession on a 1-yard Pace touchdown run, but the ever-important extra point was blocked. That set up Fairfield for a potential comeback win.

The Indians got as close as first-and-goal at the 9 before the Cardinal defense tightened up, forcing a fourth-and-goal at the 13. The fourth-down Ellis pass intended for Dashaun Simpkins slipped out of his hands and abruptly so did a GMC title for the Indians.