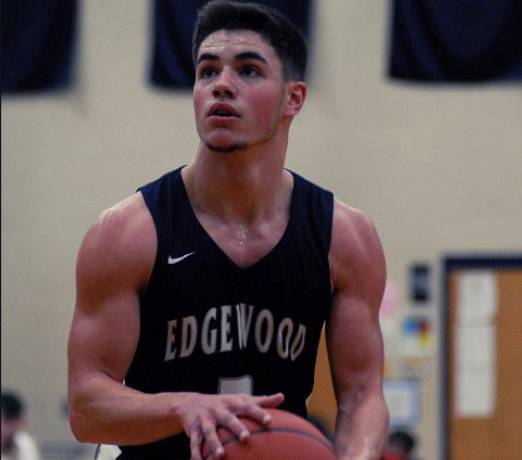 OXFORD — After getting off to a slow start in the first quarter, midway through the second that’s when the Edgewood High boys basketball team’s defense came alive.

The Cougars forced 23 turnovers on their way to beating Southwest Ohio Conference and Butler County rival Talawanda 50-45 on the road.

The Brave controlled the tempo early on, as they were cutting around the Cougars’ 2-3 zone. Senior forward Jonathan Richter scored 5 of his 15 points in the first quarter, providing a spark.

That Talawanda tempo left few opportunities for the Cougars, who struggled to get in rhythm. Edgewood didn’t get its first score until the 2:07 mark, only managing four points the entire quarter.

The second quarter was a different story for the Cougars. Aaron Frazier and Anthony Scott combined for 11 of Edgewood’s 21 points in the period after both players got off to a rocky start.

“We’ve had trouble with that in the past, coming out slow in the first half. We came in at halftime we said we needed to win the third quarter, and we did it,” said Scott, a senior point guard, who scored a game-high 18 points.

Both programs were aggressive early in the third.

The Brave were down by 7 points going into the third before senior point guard Craig James hit a 3 from the corner to get within 4. Richter scored on a driving layup to cut it to 2, and then Scott’s 3-pointer from the top of the key pushed the Cougars’ lead back to five.

Edgewood’s Caleb Allen, Frazier and Scott led a 12-3 run and put the Brave on their heels.

“Anthony made some big shots, Aaron did some things really good defensively and Caleb was a warrior out there tonight,” Edgewood coach John Thomas said.

Turnovers led to those easy baskets for the Cougars as they forced the Brave to turn the ball over. Allen drove to the basket past two Talawanda (3-4, 1-1 SWOC) defenders, but not before he showed off some ball-handling skills. Allen dribbled the ball between his legs and carried the ball behind his back for the layup.

“They got a lot of easy points in transition,” Talawanda coach Jake Turner said.

The Brave made the fourth quarter an interesting one. Talawanda outscored Edgewood 16-8 in the fourth quarter. With 2:13 left to play, James made a 3-pointer to cut it to 46-39.  Talawanda’s defense shifted to full-court pressure. Trent Hensley scored on a reverse layup to cut the lead to five. And then Schlichter scored on the Brave’s next possession. The Brave got to within 3 with 19.4 seconds left.

Talawanda could not stop the inbounds pass to Scott, who the Brave were forced to foul. Scott made both free throws, putting the game all but out of reach.

Edgewood got the best of the Brave, who was missing some players. But Turner said the excuses needed to be limited, as he knew his team had a shot to win.

“There’s one thing with these guys — you’re never going to question is their heart,” Turner said. “They are never going to give up. You can be down 20 or 30 — they’re going to always battle back to give themselves a chance to win.”

Edgewood travels to Madison on Saturday, while Talawanda hosts Loveland on Tuesday.