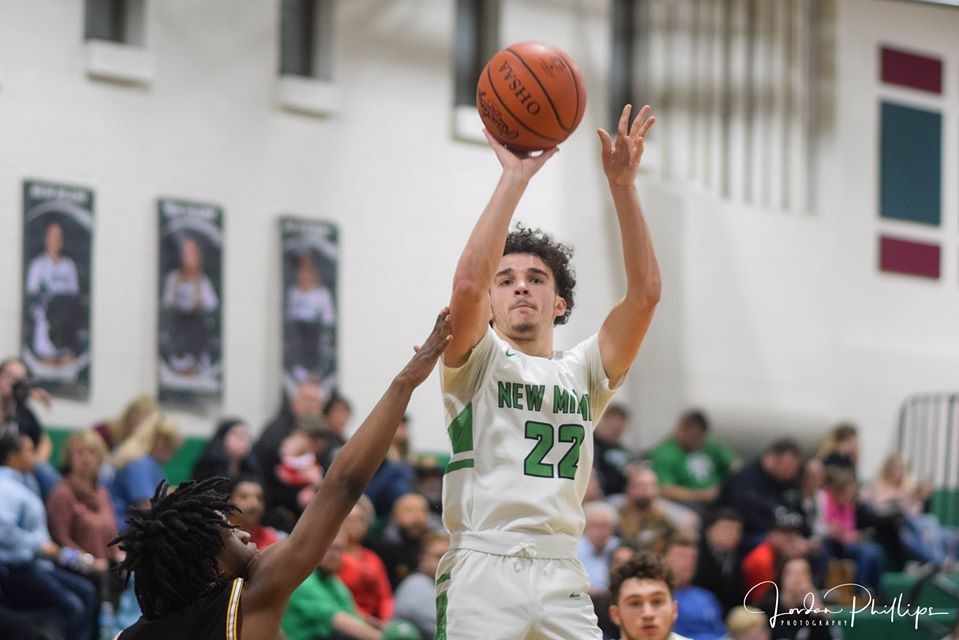 CLEVES — The Cincinnati Christian Cougars and the New Miami Vikings can rest easy, at least for now, after both teams turned in dominating performances in the Division IV sectionals on Saturday at Taylor High School.

Cincinnati Christian coach Carl Woods was very pleased to get over the hump of the Cougars’ first win of the tournament.

Vance, although proud of his performance, enjoyed watching so many of his teammates contribute to the win.

“It was a really good win, I’m happy with the outcome,” Vance said. “It was great that we got everyone, all the JV, everyone was able to contribute to it.”

After winning the opening tip, CCS dribbled the ball down court and scored with ease within the first few seconds of the game. Then, at one point the Cougars had a 21-1 lead in the first quarter. Eventually they would take a 61-14 lead into halftime.

CCS will face the Middletown Christian Eagles on Tuesday at 7:30 p.m. at Taylor.

Woods said it will be important for his team to remain sharp regardless of what the Eagles’ record is.

“The key is going to make sure we execute, limit our turnovers, do not play down to the level of competition no matter what their record may be,” Woods said. “But come out and be focused and ready to go.”

New Miami coach Jared Lee said after the game he was very pleased with the way his team took care of business.

“It was a good win,” Lee said. “They came out and played with great energy. They did what we asked them to do.”

New Miami immediately took control of the game by charging ahead of Felicity Franklin 21-7 in the first quarter. They continued to cultivate their lead and would finish the first half up 47-19.

New Miami remained ahead by such a large margin after the third quarter that the remainder of the game would be played with a running clock.

The Vikings (16-5) were led by junior Trey Robinette who finished the game with 25 points.

“Trey played fantastic,” Lee said. “He came out hot and scored the first 10 points of the game and then the first five of the second half. He’s on a bit of a mission right now. He’s only 30 points away from reaching 1,000.”

Robinette will get a chance to continue his quest for the milestone when they take on the No. 8 seed Oyler Madhatters on Thursday at 6 p.m. at Taylor.

Lee said his team is familiar with Oyler after defeating them earlier in the regular season.

“We have a big game coming up against Oyler,” Lee said. “We played them the first game of the year so I’m sure they’ll be looking for some revenge.”