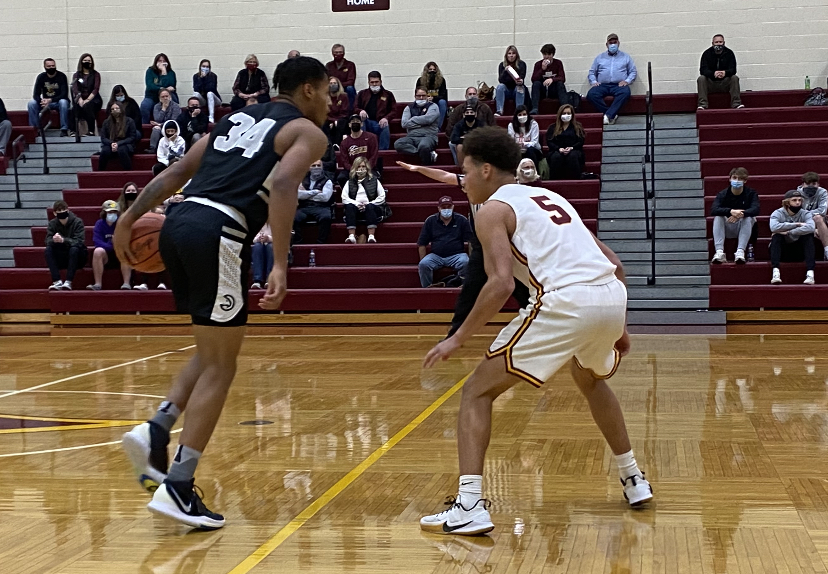 ROSS TWP. — Anyone lucky enough to be in attendance for the varsity boys basketball game at Ross High School on Saturday night witnessed what Rams coach David Lane described as a culture-defining win for his program.

With the game tied at 51 and mere seconds left to play, Ross senior Sam Nunn secured a rebound and dished a pass to teammate Joe Schottelkotte.

Then as the final seconds ticked off the clock, Schottelkotte drove to the basket for an easy layup, giving the Rams a 53-51 victory over the Lakota East Thunderhawks.

“Pure excitement,” is how Shottelkotte, who finished with 10 points, described his emotions after draining the game-winning basket. “No one expected us to win, but we believed in ourselves, so we came out and did what we did and came out with the W.”

Afterwards, Lane, whose team improved to 4-0 on the season, said although time was running off the clock with timeouts available, calling one wasn’t an option for him.

“If I’ve got the ball in Sam Nunn’s hands, I’m not calling a timeout,” Lane said. “I’m going to let the kid play it and make decisions. Joe did a great job leaking out and honestly it was like slow-motion watching it go in and emotion just took over.

“Sam Nunn is a very special player,” Lane added. “He’s the floor general and we go as he goes. He does a tremendous job taking care of the ball for us. He’s the smartest player I’ve ever coached, and he sees everything.”

Nunn, who finished with 12 points, said while some may have questioned whether the Rams could go toe to toe with the defending Greater Miami Conference champions, he and his teammates were confident they could not only compete, but win.

“We thought we matched up well and we can play with these guys no matter what anybody says,” Nunn said. “We gave it everything we had and we played to the very end.”

Although the Thunderhawks (2-1) failed to execute their offense at times, Lakota East coach Clint Adkins said he had to give credit where credit was due.

“They’re a really well-coached team and a senior-led team and they’re tough,” Adkins said of the Rams. “They’re a group of guys that it doesn’t matter if you make a little 8 or 9-point run, they just come back down and execute and they play together as a team.”

Adkins also admitted that while several players for the Rams played well, it was Nunn who gave them fits.

“The kid who absolutely killed us tonight was 21,” Adkins said. “He’s just so good. He’s heady, he gets in the paint and never makes the selfish play. He always makes the selfless play and that’s why that team’s so good. They’re so unselfish.”

Not only are they unselfish, but the Rams give max effort on a daily basis which is a big reason Lane believes his team will be successful this season.

“They just played hard,” Lane said. “That’s the constant thing that these guys do is they play hard day in and day out, night in and night out and when you play extremely hard good things are going to happen.”

Ross moved out a 16-13 lead after one quarter before Lakota East went on a 13-4 run to close out the first half to take a 33-24 advantage into the locker room.

The Thunderhawks kept the momentum heading into the fourth, but the Rams hung around.

Leading the way for Ross, which had four players score in double figures, was Max Stepaniak (12), Jimmy Booker (12), Nunn (12) and Schottelkotte (10).

Lakota East travels to Princeton on Tuesday, and Ross hosts Northwest on Friday.