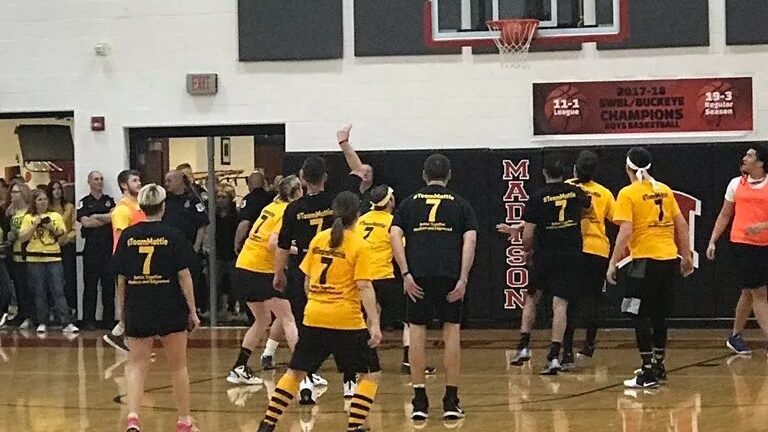 The Edgewood Cougars traveled to Madison in a rather unfamiliar, but welcoming setting.

The evening was loaded with events and performances in order to raise support and awareness for Madison student Mattie Cole and her family, while she fights Ewing’s Sarcoma cancer.

To kick off “Mattie’s Day,” the Firecrackers hit the court and had the crowd in awe with their jaw-dropping routine that was nothing short of spectacular. The Firecrackers are a local jump rope team for grade school girls from Kings Local Schools that travel and perform in venues of different sizes all over.

Up next was the main ticket, the staff basketball game between the Cougars and Mohawks.

Typically, I am rather serious and provide statistics when doing a game recap, but since this game was all for fun (or so we thought), no statistics were kept, but I promise there was a lot of scoring and not so many fouls.

The first half was all fun and games between both squads, with each team taking their turn to light up the gym with cheers and roars.

I should mention, to much of the student’s surprise, these teachers could still get after it.

Going into the break, the Cougars had the lead 24-23 over the Mohawks staff.

You know how I mentioned that the first half was all fun and games? Yeah, that ended in the second half, with the true competitor coming out in everyone who hit the court.

Although through the competition all good spirits were kept, and the real reason everyone was there wasn’t for a basketball game, both squads decided it was time to get a win and battled until the end.

While stats weren’t tallied tonight, Madison was definitely led by athletic director Matt Morison who looked a little reminiscent of his own high school days, as he poured in quite a few 3’s in the second half, in quite a familiar gym.

When the final horn sounded, as cliché as it may be, the Cougars and Mohawks ended in a 51-all tie.

Yes, you read that right, a tie.

Even after many chants and yells from students and fans requesting overtime, the staff had decided they had already risked pulling a hamstring enough, and decided to hang it up for the night.

Although there was no winner declared in the basketball game, the real winner of the evening were both the Edgewood and Madison communities as they were able to combine and raise thousands of dollars for a fellow student in need.

The night was all around a positive experience for everyone involved, and really goes to show what these communities can do when they come together for a common cause.

On behalf of the Butler County High School Sports Report, we wish nothing but the best and a speedy recovery to Mattie and her family, as well as praise for the Edgewood and Madison communities for their outpouring support for the Cole family during this time.

Noah Banks is a senior at Madison High School and plans on studying journalism when he attends the University of Kentucky this coming fall.