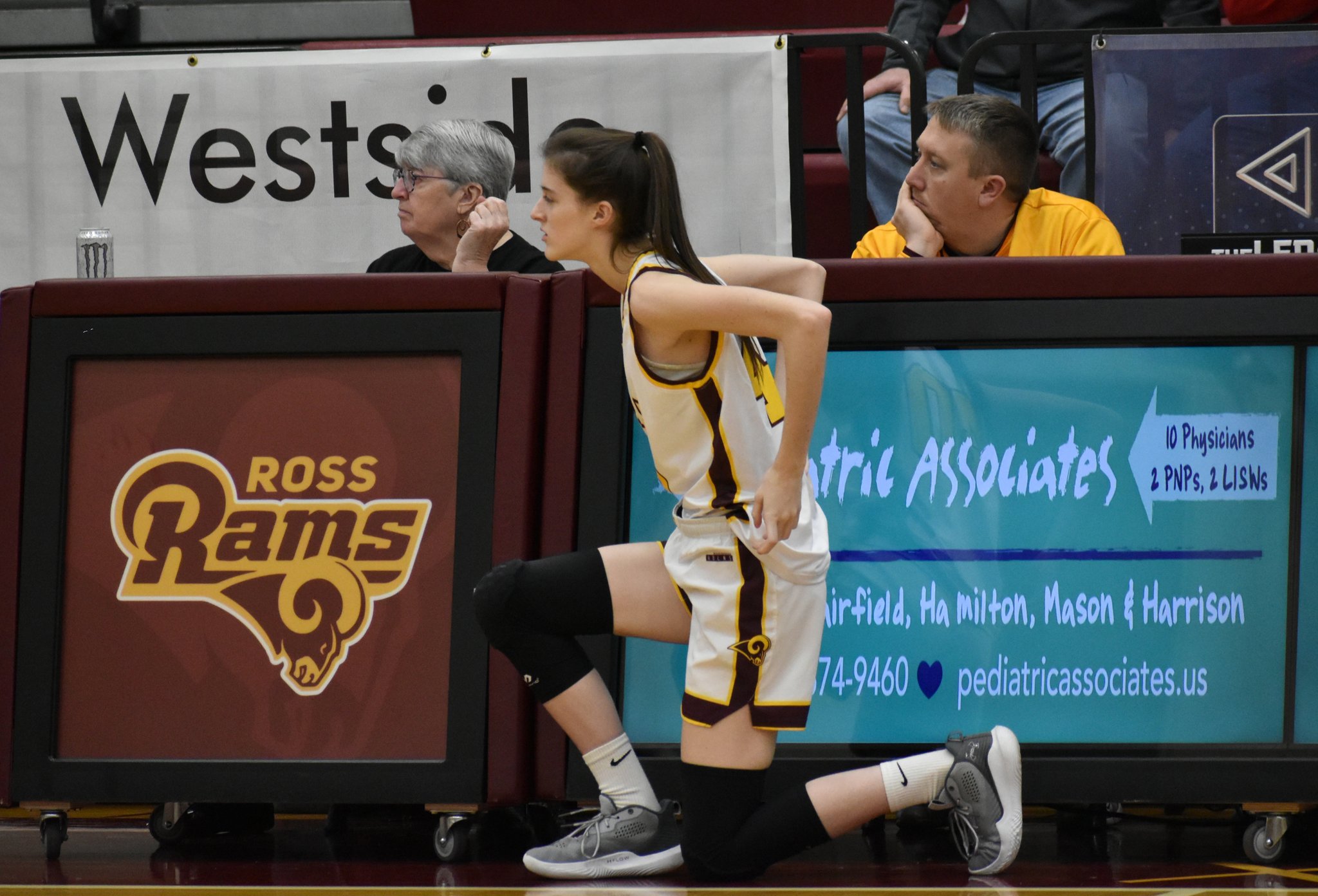 She was ready to start her junior campaign on the Ross High School varsity girls basketball team.

That was back on Oct. 21, the Ohio High School Athletic Association’s first official day practice could begin.

Suddenly, White felt like she wasn’t ready to go.

“She came home later that day — the first day of practice — and said her toes felt weird,” said Jeanie, Annslee’s mother. “She said, ‘They’re tingling.’ … I didn’t think much of it.”

On the third day of practice, White went to the trainers to talk about the physical symptoms she was experiencing.

“It seemed everything was checking out OK,” Jeanie said. “We chalked it up to a possible pinched nerve, and we’d take a couple days to monitor it.”

Every day accompanied a new symptom.

“I think it was getting to the point where people didn’t quite understand just how bad it was getting,” Jeanie said. “This was starting to get more and more serious.”

“I was falling down the steps at school and tripping at practice,” Annslee recalled. “Yeah, something was wrong. The tingling went from my feet then to my hands. Something wasn’t right at all.”

“She couldn’t tie her shoes,” Jeanie chimed in.

“I think it was around the one-week mark (with symptoms), when she called me from her car after practice and she just lost it,” her mom said. “She started bawling.”

Annslee was cut off from basketball practice that day.

“She wasn’t moving quite normal. She wasn’t herself,” Ross coach Ben Buehner said. “As the days went on, she just had this look in her eyes. She just didn’t look like she felt good.

“Her run started to become a limp,” Buehner added. “She started to drop balls she’d normally catch. … She shot a free throw during practice, and it didn’t come anywhere near the rim.”

“I just couldn’t feel it coming off my fingers,” Annslee said to Buehner.

The next practice, Annslee couldn’t get off the ground for a routine layup.

“The ball just rolled right out of my hand,” she said. “It was so embarrassing.”

“I looked at our assistant coach (Bobby Lipps) and knew that we had to shut it down,” Buehner said.

Annslee was frustrated. And hurt. And confused.

Annslee’s father, Matt, ran into Buehner that night and talked about what was happening.

“I told him that we couldn’t throw her back out there until she gets looked at,” Buehner told Matt.

Jeanie said the next step was to schedule some doctor’s appointments, and even that was a tall task given the fact some doctors wouldn’t see Annslee because of her age.

“Her symptoms are getting even worse — her motor skills continued to decline,” Jeanie said. “She was sore. Pain all over. Weaker each day. Lost appetite. Couldn’t focus at school.”

X-rays on her feet and lab work were done, and the results came back a few days later. Annslee’s rheumatoid factor was elevated, Jeanie said, so they sent her to a rheumatologist.

“I called the trainer to find out what else I could do for her,” Jeanie said.

They scheduled an appointment with Children’s Hospital just to have something in the books, but that still was going to be six weeks until Annslee could be seen.

“I’m calling all over the city. All these rheumatologists. Tri-Health. Mercy. Everywhere. They all kept telling me the same thing, ‘Sorry, she’s a minor. Not going to see her.’”

They were stuck — stuck with a December appointment at the beginning of November.

“I was calling Children’s constantly to see if there were any openings — begging to get an earlier appointment,” she added.

When Jeanie realized she wasn’t getting anywhere, it was time to take Annslee to the emergency room.

“So here we are, it’s Friday afternoon, and we have two more days until everyone is back in the office. We thought, ‘What are we going to do?’”

Ross had a scrimmage and basketball pictures on Saturday, Nov. 5, and it was immediately after that when Annslee was seen at the ER.

“I’m seeing her decline daily,” Jeanie said. “She gets home from the scrimmage, and says, ‘I couldn’t start my car with one hand. I couldn’t have the strength, and I had to use my other hand.’

“We had no other option. That told us right there that we had to go. We had to go now.”

A 16-hour visit at the emergency room consisted of 9 ½ hours of waiting and 6 ½ hours of testing and bloodwork, and doctors still didn’t find anything concerning.

Annslee was referred to a neurologist.

“Neurology called that following Monday and said they could squeeze her in on their lunch break,” Jeanie said. “I grabbed her from school, and we went.”

Annslee and her family felt like they were getting somewhere. That’s because they, indeed, were.

“Doctors came back to us and said it would be wise for us to admit her right now,” Jeanie said. “They thought that she may have Guillain-Barre syndrome.

“We were like, ‘What the heck is that?’” Jeanie questioned.

It’s a rare, incurable disease in which the body’s immune system attacks its nerves.

“We were walking around with a notebook and a pen everywhere we went, writing down things,” Jeanie said. “If it were to be that, it was reassuring to find out there is treatment for it.”

While there are no specific tests to confirm Guillain-Barre syndrome, a series of markers, bloodwork and other factors can suggest it, the family discovered.

“We were finally admitted, and she was getting a spinal and brain MRI done within the hour,” Jeanie said.

Again, everything came back OK.

Next was a lumbar puncture.

“She’s petrified of needles,” Jeanie said. “But they did it right then. Annslee agreed to it. … We joked that we can’t back out now.”

Again, everything came back OK.

Next was an electromyography, a painful procedure that tests nerves and muscles using prickling needles.

And after all that, it was in fact determined Annslee had a type of Guillain-Barre syndrome.

“We found out that it could take weeks and weeks to recover — some others never do,” Jeanie said. “To start the reversal process, Annslee was getting pumped full of good antibody infusions so that they can kill the other ones that are attacking her.”

Annslee was in the hospital for the next 10 days.

“My coaches and teammates kept me in good spirits,” Annslee said. “My parents kept pushing to get me the help I needed. And my siblings (Madison and Hunter), they were keeping me in high spirits, making me laugh. … Like most siblings, they were making fun of me and all that by making me laugh.”

Through a little perseverance and determination, Annslee was quickly on the upswing.

“I couldn’t believe how fast I was rebounding,” she said. “I had doctors telling me that the odds of me getting back out there on the court were going to be slim. I was told recovery time could take months.

“My coaches didn’t think I was going to be back. No one knew what was going to happen with recovery. … I was just really amazed with myself, to be honest.”

Annslee said she began to set goals during her 10-day stay in recovery.

“I wanted to be back by the end of the season, just so I could get a little bit of time in,” she said.

“She has a laid-back personality, but she’s a very determined person,” Jeanie said of her daughter. “She’s got a very type-A personality — wants to do her best all the time.

“That’s honestly the best thing that has carried her through this,” Jeanie added. “She’s just a happy, trusting person and wants to get out there and have fun and do her job.”

Things were starting to look that way. Annslee was making exceptional progress with eventual at-home therapy.

She was dribbling a basketball, too.

“You just need to keep your head up and keep praying and listen to the doctors and therapists,” Annslee said. “Go to your therapy sessions, and it will get better eventually.”

Last week, doctors gave Annslee the green light to hit the court, but with limitations.

“I remember the first day she could run with no contact and with minimal time out there so she could catch her breath,” Buehner said.

Buehner kept a watchful eye on Annslee throughout her first time back out.

After the second practice, Buehner and the Ross coaching staff debriefed about Annslee’s progress.

“We saw her walking by the coach’s office, and we asked her if she was OK coming back to play in games,” Buehner questioned.

Said Annslee, “I really didn’t think about asking whether I’d be able to come back or not.”

Buehner had the Talawanda game on Jan. 4 penciled in for Annslee to possibly see action.

“But we decided on a little more practice,” he said.

Ross went up against Mount Healthy on Jan. 7, and that’s when Annslee had a gut feeling that she’d be playing basketball for the first time this season.

“I was really nervous,” she said. “My stomach felt like it was twisting. I didn’t expect to go in this early.”

Annslee checked into the scorer’s table mid-game. She entered the contest and stayed in for a decent amount of time.

“We saw an opportunity to get her in. It’s just the way she battled and defended and rebounded. We just kept her in,” Buehner said. “We kind of had a thought in our mind that we were going to give her a couple two-minute spurts. We did that the first and second rotation.”

Annslee ended up playing the entire fourth quarter and brought down a game-high seven rebounds in the Rams’ loss to the Owls.

Next up was Franklin on Monday, Jan. 9.

Annslee grabbed another game-high seven rebounds, and the Rams cruised by the Wildcats 53-24.

“She answered the call,” Buehner said.

After Annslee’s first two games back, she was listed fourth in the Southwest Ohio Conference rebound stat category.

“If you ask me, pretty stinking unbelievable seeing that up there,” Jeanie said.

“Once I was out there, it started to feel like it was all normal,” Annslee said. “I was just mainly out of breath and tired. But my body was able to keep up. … My body was sore. But being sore is nothing compared to what I went through to get to here.”

“There were tears coming down,” Jeanie said. “I didn’t think it was going to happen this quick. I’m just so proud of her. She’s worked hard. … It’s really hard to put into words.”

“Around Christmas time, we didn’t think that we were going to have her at all this year,” Buehner said.

But when Ross takes on Badin this Saturday, she will be ready to go, again.