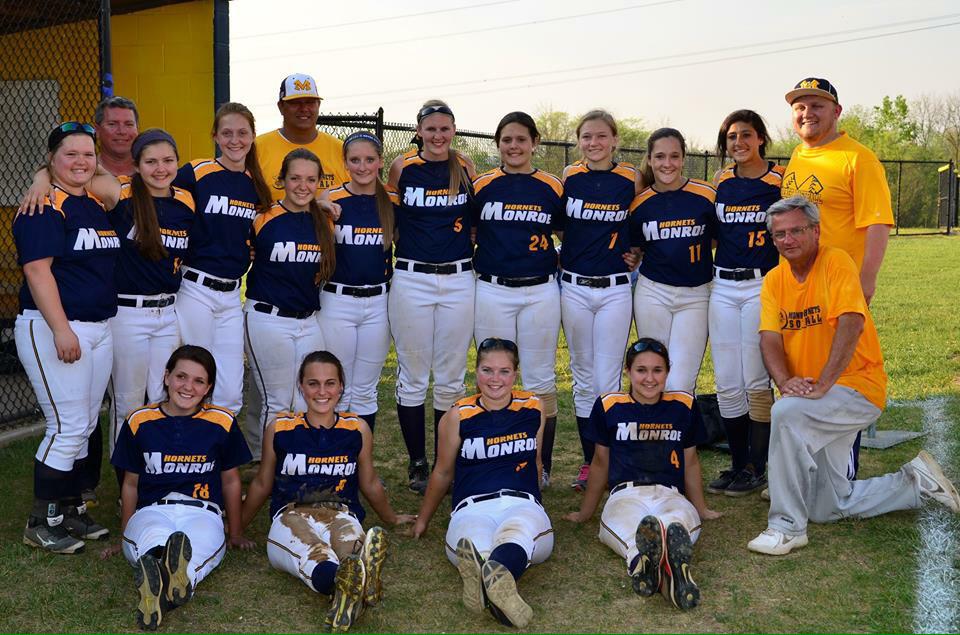 This story is part of The Butler County High School Sports Report’s “Blast from the Past” feature series.

After all, he did credit the 2015 Hornets softball team to being the jump start for its string of success. So why wouldn’t it feel like yesterday?

“It was team No. 77, the class that got the ball rolling for the current status of Monroe softball,” said Kellis, who was in his third year at the helm back then. “As you look down the roster, you see nothing but successful kids in their current life today.”

That roster consisted of next to no seniors. Only two to be exact. But it was one of those seniors who packed a leadership-like punch and helped propel a squad to a 21-5 record, as well as its first-ever Southwestern Buckeye League Southwestern Division championship.

“The 2015 season was incredible. I remember having a lot of hope going into that season,” recalled then-senior Shelby Horne, who played the role of mentor to a youthful lineup after missing her entire junior year because of a dislocated knee cap.

“We had incoming freshman talent to complement our talented sophomores and juniors,” Horne added.

“That season set a standard for future seasons,” she continued. “So much progress was made that year, and the bar was raised. Players knew at the start of each new season what the expectations would be. The coaches and team leaders would not settle for anything less.”

It was a rare trip to Tennessee that, in fact, set the tone and provided a foundation for competitiveness.

“We took our first-ever spring break out of town. We got our tails handed to us,” recounted Kellis, whose Hornets suffered 2 of their 5 losses down south.

“I think the team found itself after that,” Kellis said. “It was an eye-opening experience.”

Horne echoed that sentiment, saying the time together outside of the school’s environment tested the team’s abilities and solidified camaraderie. Playing higher-level competition didn’t hurt either.

“The spring break trip did help shape the team,” Horne said. “This trip allowed us to see what the team was really made of when playing Division I high school teams.

“The losses down there pushed us to work harder,” Horne added. “We didn’t want to settle. We wanted to get better as individuals and as a team.”

And the Hornets did get better. A lot better.

Following the southern visit, Monroe went on to win 19 out of its next 20 — which included a 16-game winning streak.

“There was a lot of stepping up from the junior class that year after the trip,” said Faith Hensley, who led the team in batting average (.529) as a freshman. “We all played together since we were very young, so that kind of helped with the chemistry and making sure that they were comfortable with one another. They did a great job of stepping up and being great leaders. It was remarkable.

FIGHTING PAST A RIVAL

What had already been established was Monroe’s uphill fight versus league rival Franklin.

Kellis said after the Hornets lost to the Wildcats 3-0 earlier in the season, his squad was hungry and eager to halt a streak of losses against its foe.

Monroe did it in league-title fashion.

“My fondest memory of that team was the win at Franklin,” Kellis said. “That game was so intense and so back-and-forth.”

The visiting Hornets moved out to a 6-0 lead after two innings. But the Wildcats surged back with a 5-run third inning.

“I do know that whenever we went to Franklin or they came to us, the atmosphere was just electric,” Hensley said. “It didn’t matter what was happening off the field, we just bonded together in order for us to beat them. They were our biggest rival. And rivalries showed you what you were really made of.”

The Hornets never did let the Wildcats pull any closer than that 1-run margin in the third, and they kept a steady lead the rest of the way for a 13-10 victory. The win clinched the SWBL Southwestern title, and Monroe ended up finishing 11-1 in the league.

“Beating Franklin was a hump we had to get over,” Kellis said.

“When we lose to them, it just didn’t settle right with us,” added Alexis Arnold, who led the team with 12 home runs as a sophomore. “To have lost 3-0 to them earlier in the season, we knew that was unacceptable. It was just good to live in that moment.”

It was no more than two weeks later when the Hornets squared off against Franklin in the sectional finals of the Division II tournament.

“We ended up losing to them, of all teams,” Kellis said, noting that his team played out of its element in an 11-9 defeat. “What’s crazy is that we ended up battling back. We could have won that game.

“But, I told the girls, ‘You never take anything for granted,'” Kellis added. “And what they ended up doing was taking that season-ending loss and turning it into a positive. They wanted to come back the following year and wanted it even more.

“Again, that team set the bar for how this team plays right now,” Kellis continued. “I think that’s the thing that I’ll remember most from that year is how they held a standard that lives on to this day.”

Hunter Salyers, SO, P, OF

Have a Butler County high school “Blast from the Past” feature story idea? Send us an email to info@BCHSSReport.com.