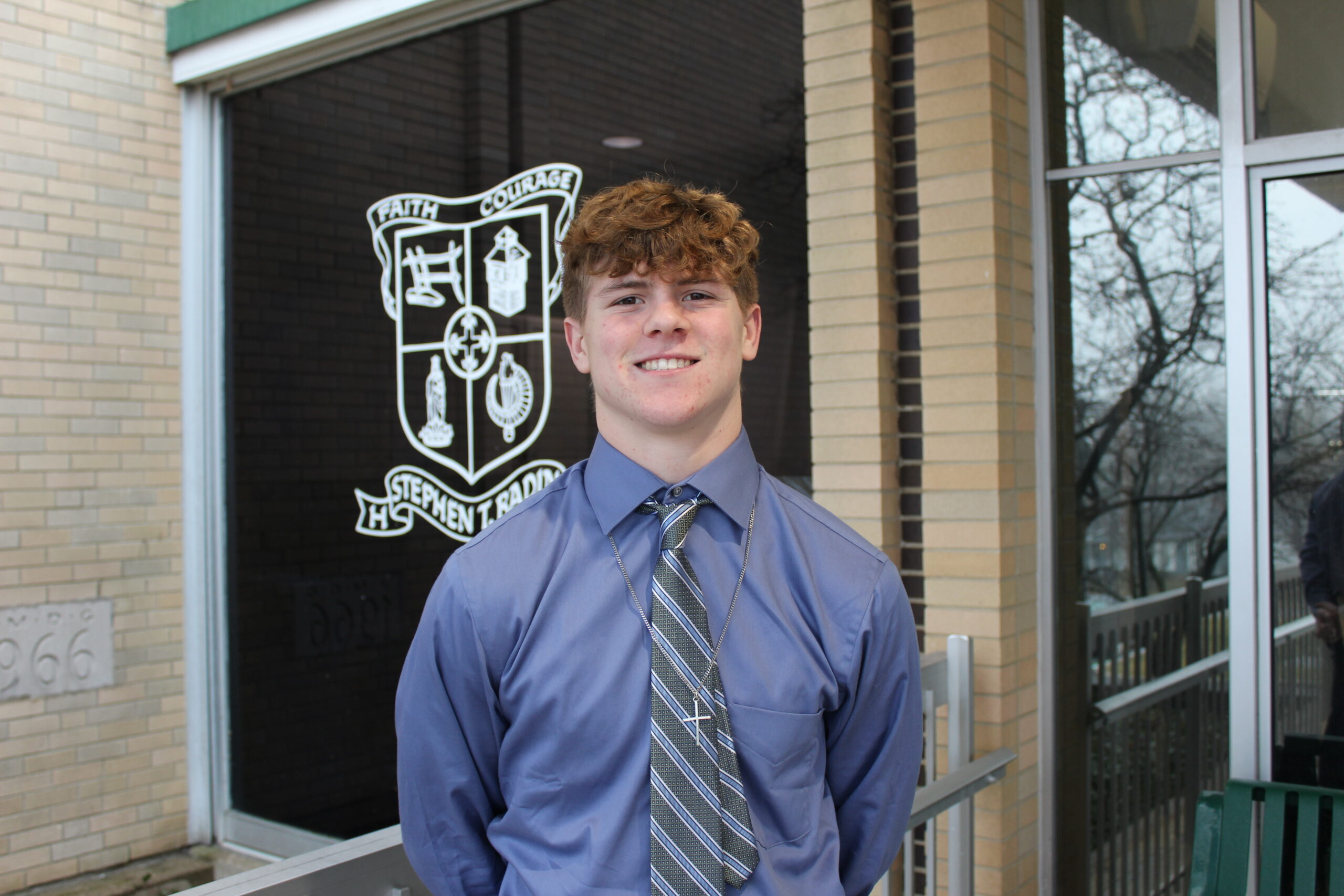 HAMILTON — Add the “That’s My Boy” award to the list of honors garnered by Badin High School senior Alex DeLong this year.

“I was very surprised – I didn’t expect it at all,” a smiling DeLong said. “I was listening to the list of accomplishments for all of the other nominees, and I didn’t think it would be me.”

The “That’s My Boy” program is directed each year by the Greater Cincinnati chapter of the National Football Foundation and College Hall of Fame. It is considered the top award available to high school football players in the area.

“Alex has been a true example of what it means to be a student-athlete at Badin,” BHS football coach Nick Yordy said. “Not only has he excelled on the football field and in other sports, but in the classroom as well. His work ethic both on and off the field has set the standard for what is expected of our football players.”

Badin’s DeLong was recognized from among Greater Cincinnati prep football athletes, while Michael Mayer of Covington Catholic High School earned the award for prep football athletes representing Northern Kentucky. They were two of a number of student-athletes honored at the annual dinner on Thursday, Feb. 20, at the Manor House in Mason.

DeLong noted that each of 10 candidates for the award from Greater Cincinnati first received a plaque – and then the emcee started reading the accomplishments of the winner. At some point, he realized the emcee was talking about him.

“I looked over at Coach Yordy,” he said, “and he had a big smile on his face, because he knew. And then I just started smiling. It was awesome.”

DeLong, the son of Craig and Sarah DeLong of Fairfield Township, is a graduate of Edgewood Junior High. He was a first-team Greater Catholic League Coed Division selection as a tailback, and set the single season rushing record in the history of Badin High School with 1,513 yards in 2019. After an 0-2 start, the Rams completed a 9-4 season that reached the regional finals of the Division III postseason, their best tournament run since 2013.

DeLong is a three-sport athlete, having started on the BHS boys basketball team that just completed a 17-6 season; and is in his second season running track following two years of baseball. He was first team all-league in football as a junior as well.

“It’s been great,” he said of his Badin experience. “There’s really no place I’d rather be. I’m glad I made the decision to come here. … Four years have flown by. I want to just savor every moment that I can in these last few months and then get ready for college football.”

DeLong will play football at Butler University in Indianapolis and major in Biology as a pre-med degree.

Asked about his football success, DeLong referred to “my work ethic. It’s what I do to get prepared for games. That’s helped me. I try not to get over-hyped. I don’t talk a lot on the field. I just try to keep quiet and stick to what I’m good at.”

When DeLong ran for 233 yards against Edgewood High in Game Three – including a 78-yard TD run on the first play from scrimmage in the second half – that helped jump-start the Rams’ rebound from the 0-2 start. Badin went 7-1 the rest of the regular season, then knocked off Ross and Kettering Alter in the postseason before bowing to Trotwood Madison, which subsequently won the D-III state title.

Matt Frankey, from the Badin High Class of 2007, is the only previous BHS student-athlete to receive the “That’s My Boy” award, which represents football excellence, academic performance and involvement in extracurricular activities. The award has been presented each year since 1962. The Southwest Ohio Football Coaches Association oversees the nominations.

Submitted by Dirk Q. Allen, who is the Director of Admissions and Media Relations at Badin High School.