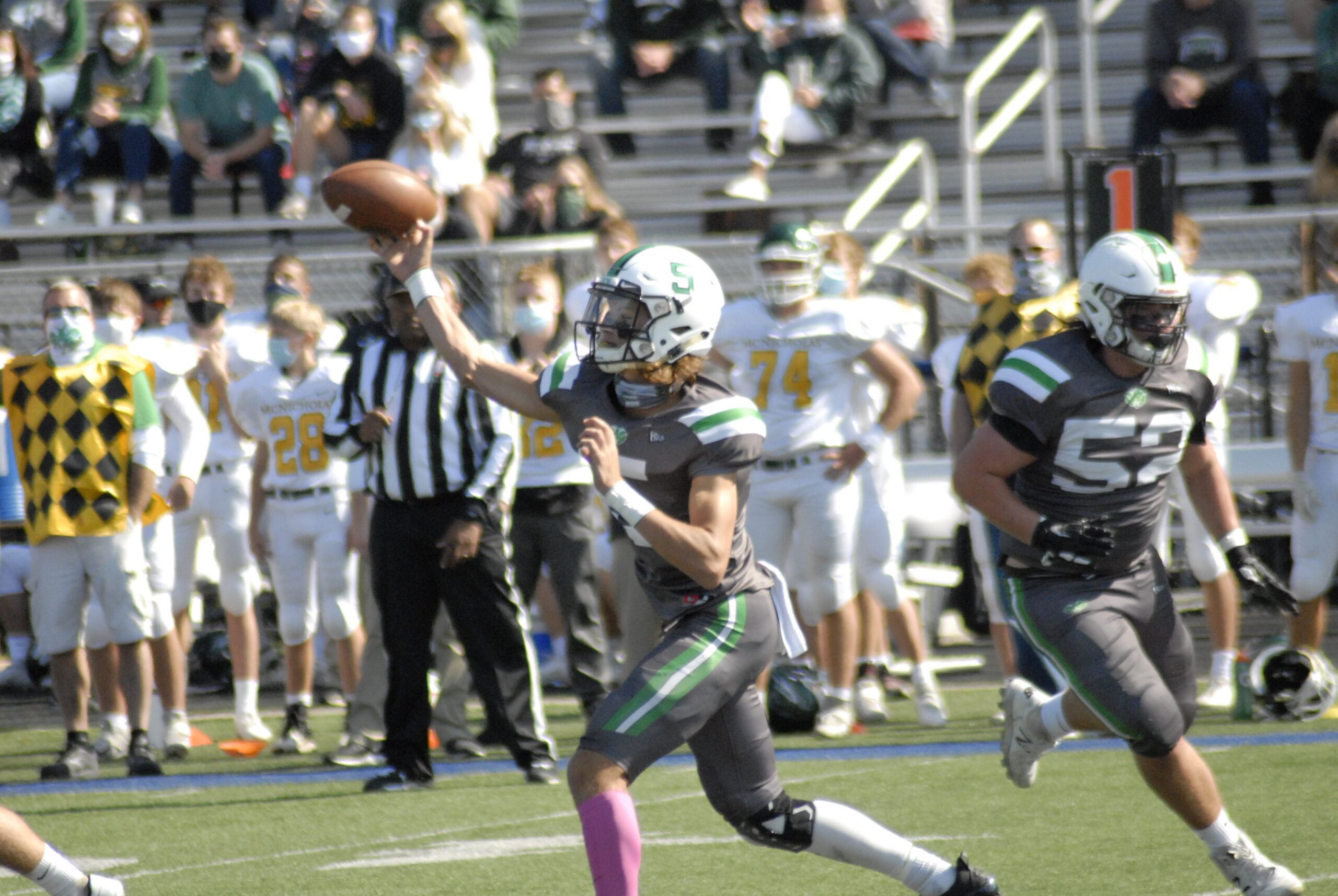 ST. CLAIR TWP. — An outright conference title and an undefeated season was on the line Saturday. The Badin High football team now has all the momentum it needs going into the Division III playoffs.

The Rams scored all of their points in the fourth quarter to top Greater Catholic League Co-Ed rival McNicholas 10-7 at Edgewood’s Kumler Field.

Badin, which moved to 6-0, captured its first undefeated season in four decades.

“We told the kids all week it was going to be a battle,” Badin coach Nick Yordy said. “McNick is a heck of a football team and very well-coached.”

The Rockets took control of the game late in the first quarter. On second down at their own 22-yard line, Wyatt Gear caught a 31-yard pass from Clay Badylak to get into Badin territory.

Badylak and Gear then combined for 28 yards rushing to lead the Rockets to the Rams’ 19-yard line. On the next play, Badylak connected with Gear for a 4-yard catch to get the ball to Badin’s 15-yard line. Badylak was hurt on that same play, knocking the senior quarterback out of the game.

The Rockets (4-2) found the end-zone four plays later. Pierce Taylor rolled to his right and hit an open Jack Suttles for the 5-yard touchdown catch.

The first few possessions, Badin had issues finding its rhythm, not really being able to move the ball against the second-ranked scoring defense in the GCL Co-Ed. The Rams was forced to punt on their first two possessions,

Then on their third possession, Rams quarterback, Landyn Vidourek threw an interception right into the arms of a leaping Taylor. To add to the drama of this game, the very next possession, Badin drove the ball down to the McNicholas 22-yard line. Vidourek lost the ball as he was running away from the Rocket pass rush. The Rockets’ Brogan Dolan recovered the fumble.

Although the offense was not clicking on all cylinders at the moment, the Rams’ defense and special teams were the difference maker. Michael Schweinefuss sacked Taylor for a 13-yard loss to end the third quarter. Four plays later on a fourth-down, Tyler Haynes punt was blocked by running back Jack Walsh, recovering the ball at the Rockets’ 18-yard line.

“Coach told me not to go for it but I saw that the snap was kind of slow there,” Walsh said. “He didn’t get the punt off quick do I just went for it.”

Walsh and his teammates took advantage of the opportunity, running up the middle for a 6-yard touchdown run. Schweinefuss’s kicked the extra point for the tie. In addition to Walsh’s game-changing block, he accounted for 118 yards on the ground.

Badin’s defense and the special team continued to swing the momentum in the fourth quarter with the one-two punch of Walsh and John Rawlings to get the Rocket 5-yard line.

After Walsh was stopped by Vincent Beiser, Yordy called for his field goal unit. Schweinefuss hit the 21-yarder for the go-ahead score with 4:17 left in the fourth quarter. Badin’s defense held McNicholas one last time with Logan Neu sacking Haynes and Braedyn Moore sealing the win with an interception.

No. 2 Badin will have a bye week going into the playoffs. The Rams will await the winner of the Lima Shawnee and Wapakoneta.