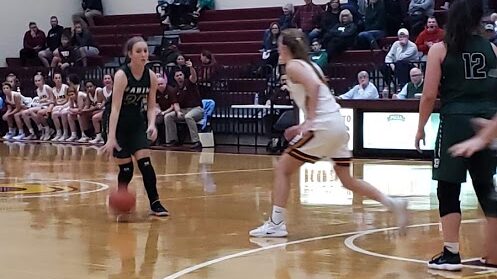 ROSS TWP. — The Badin High girls basketball team took the crown in the Battle of the Rams showdown with a 41-16 victory over host Ross on Tuesday.

The two teams struggled to find any rhythm, let alone any offense, the first five minutes of the opening quarter.

Ross guard Reece Shields ended the scoreless streak with her basket with 2:49 left in the first quarter. But it was a Shelby Nusbaum 3-pointer from the right corner as time expired that gave Badin an 8-2 lead at the end of the first quarter.

“It felt pretty good,” Nusbaum said when asked about her performance. “My teammates were close behind me with tons of support.”

Despite having a struggle early on with its offensive game, it was Badin’s defense that shined.

“When you are struggling offensively, the best cure to that is a good defense,” Badin coach Tom Sunderman said.

Badin showed Ross several looks on defense, mixing in some man-to-man and switching to a full-court press. Ross constantly turned the ball over numerous times and was not able to recover.

“We just had few too many possessions in a row where we were missing assignments defensively,” said Ross coach Ben Buehner, who is in his first season at the helm. “Live-ball turnovers killed us.”

Badin once again got on a small run in the second quarter, grabbing a 19-9 lead heading into the halftime break.

In the second half, Ross did make adjustments on defense, switching to a zone that made Badin uncomfortable. The Ross Rams defense couldn’t bail itself out though as offensive turnovers continued to cost them dearly.

Badin’s defense caused Ross to make errors that led to an 18-7 run late in the second half. The run pushed it to 37-16 in favor of Badin with over three minutes left to play.

Grace Stenger and Emma Harville each had five points to pace Ross.