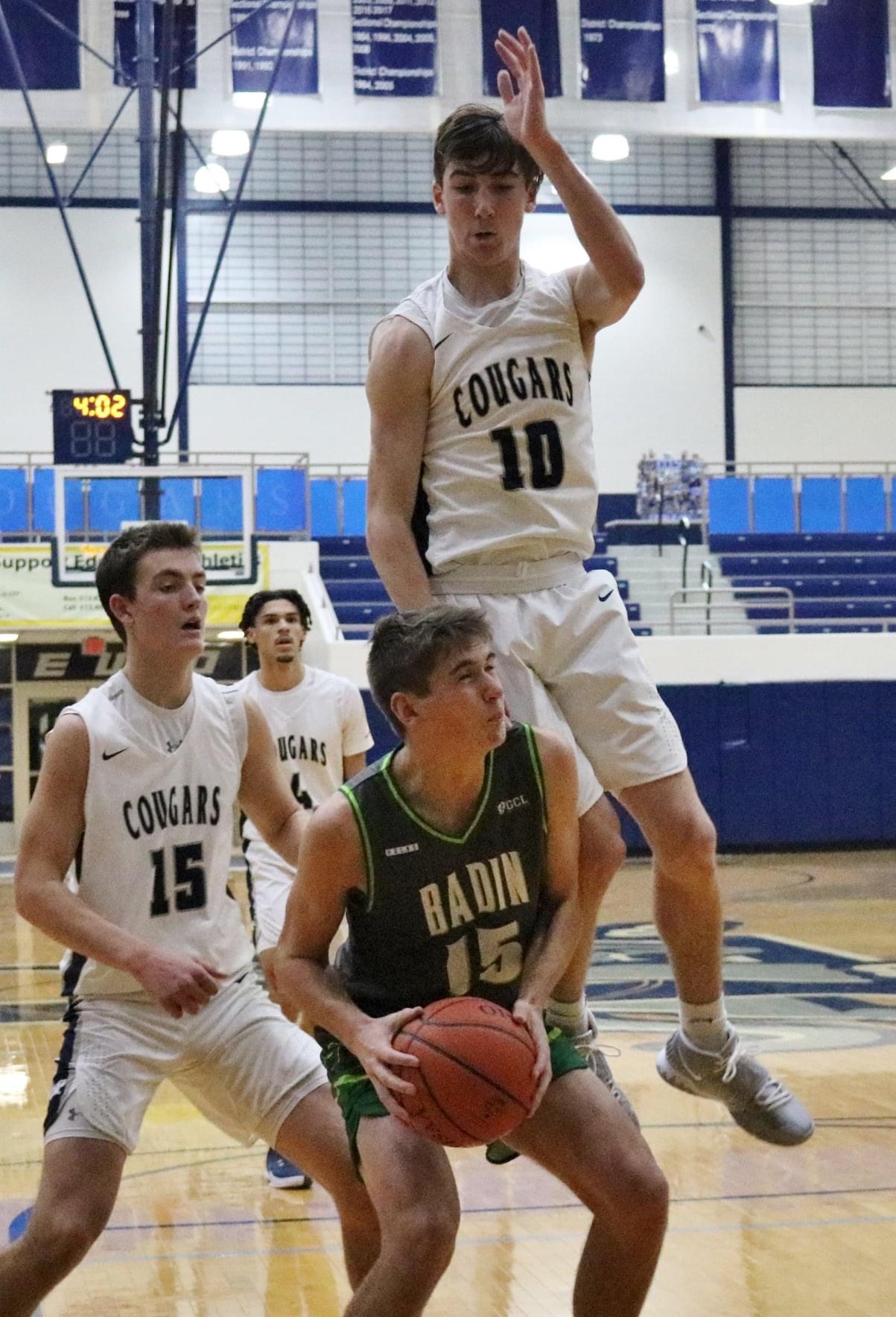 ST. CLAIR TWP. — The Badin High boys basketball team had to fend off an Edgewood comeback Tuesday night, as the Rams pulled off a 48-43 non-conference, Butler County road win.

Both teams started off slow, combining for 11 total points in the first quarter with Badin owning a 6-5 lead.

For the Cougars (3-4), getting a good start has been their Achilles heel, according to Edgewood coach John Thomas.

“It’s been a problem with us honestly,” Thomas said. “We’ve got to quit doing that somehow, someway.”

Badin coach Gerry Weisgerber categorized this one as a grinder. The win moves the Rams to 4-2 on the season.

“This was a tough one tonight — this was a big win for us,” Weisgerber said.

Both teams went on scoring stretches in the second quarter, with Badin striking first on a 7-2 run for a 13-7 lead. Thomas called a timeout to adjust his team’s defense, switching to a 1-3-1 zone.

The plan worked as the Cougars forced the Rams to take some bad shots, beating them with their transition game. Edgewood senior guard Aaron Frazier scored five points during the Cougars’ run.

Edgewood’s Caleb Allen, who had a game-high 20 points, scored right before the buzzer to tie it at 18 apiece heading into the half. The Cougars ended the quarter on an 11-4 run.

But the Rams used their length as an advantage, outrebounding the Cougars near the end of the third period. The Rams also outscored Edgewood 18-9 in the quarter — resulting in a 36-27 advantage.

The Cougars began to heat up with an 8-2 run, forcing Weisgerber to burn a timeout after the hosts got back-to-back treys from Allen just a minute into the fourth.

Edgewood was only down 38-35, and the Cougars eventually took the lead after two buckets by Frazier that made it 39-38.

Badin regained the lead after senior guard Andrew Larkin hit two foul shots. The lead would be short-lived as Allen hit his third 3-pointer of the quarter for a Cougars’ 42-40 lead. Weisgerber switched his defense from man-to-man to a 2-3 zone.

“We went with that to try to slow him down. (Allen) was beating us off the dribble,” Weisgerber said.

Larkin, who tied David Schweinefuss with a team-high 10 points, hit a couple free throws to knot the game at 42 midway through the fourth.

Schweinefuss and Bobby Young both scored for a slim lead four-point lead for the Rams. Then Badin’s defense did the rest by holding the Cougars without a field goal the last 2:15.

The Rams, now winners of three out of their last four, go into the Christmas break with some momentum. As for the Cougars, there’s soul searching after losing such a close game.

“We don’t like losing at all,” Thomas said. “This has become a good game the last few years. It’s a little emotional as it gets going a bit.”

The Rams travel to Chamimade Julienne on Monday, Dec. 28.