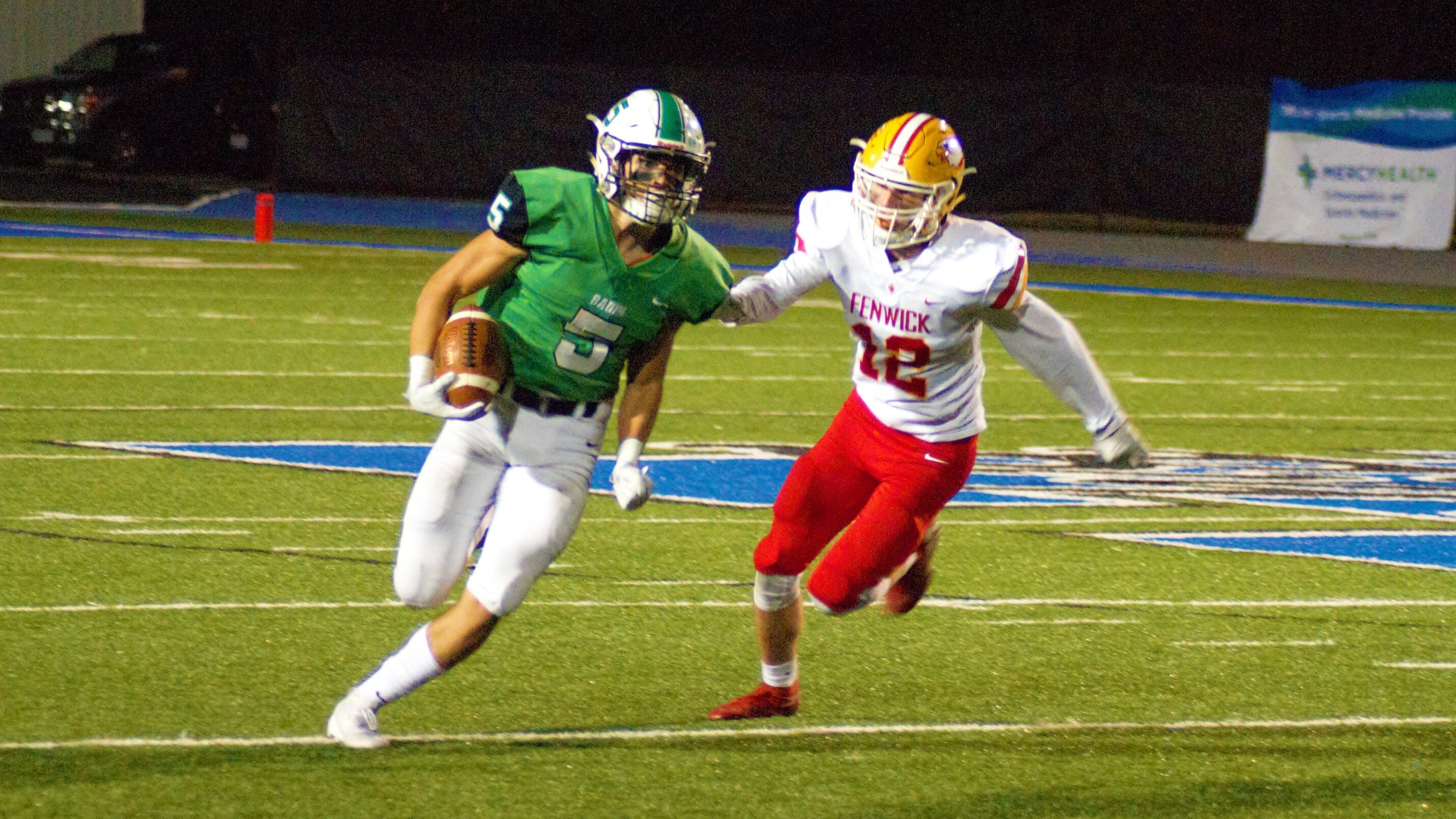 HAMILTON — The defense and rushing attack provided the majority of the spark for Badin in the first half, as the Rams cruised to a 34-6 win over Fenwick on Friday at Virgil Schwarm Stadium.

Though Badin dominated in the first half, the Falcons had a chance to make things interesting in the first quarter, but could not execute.

Fenwick went three and out on its first possession, and Falcons punter Ralph Ross booted the ball to Badin returner Josh Hegemann. The ball hit Hegemann on the top of his hands, and as he was falling, he couldn’t corral the ball quick enough before two Fenwick defenders fell on it at the Badin 23-yard line.

The Falcons got another opportunity to stay in the game, aided by their special teams. Rucker received the kickoff deep on the Fenwick’s own 16-yard line, running up the middle before juking through Badin defenders before being tackled at the Badin 16.

Fenwick started the drive with a 5-yard penalty but wasn’t able to make a couple of plays stand up for points. put them in a position to come away with some points with maybe a field goal.

Fenwick coach Dave Haverkamp elected to gamble on fourth down with a Schuh run that was stopped by Badin defenders Emari Smiley and Keegan Gormley.

After that drive, the first-half was all Rams as they only allowed six total yards of offense.

“They were just the more physical team on the line of scrimmage,” Haverkamp said. “They won the battle in the trenches. They really owned us in the first half.”

Last week, the Rams had issues establishing the run in their loss to Chaminade-Julienne. Badin only managed to run for 52 total yards on 18 carries.

On Friday night, the Rams more than doubled that — running for 133 yards in the first half alone. Senior running back Alex DeLong accounted for three of Badin’s five total touchdowns, including a 53-yard scamper in the third quarter that put the game well out of reach.

DeLong finished with 119 yards on 16 carries and those three scores for Badin.

“In that CJ game last week, we didn’t do a good job of establishing the run,” Badin coach Nick Yordy said. “We talked about that this week. We needed to get our running game going a little bit better and maybe open up some of our passing game.”

Colt Bradshaw rushed for 82 yards and a score, which put Fenwick on the board in the fourth frame.

Badin travels to Carroll on Friday, while Fenwick visits CJ.