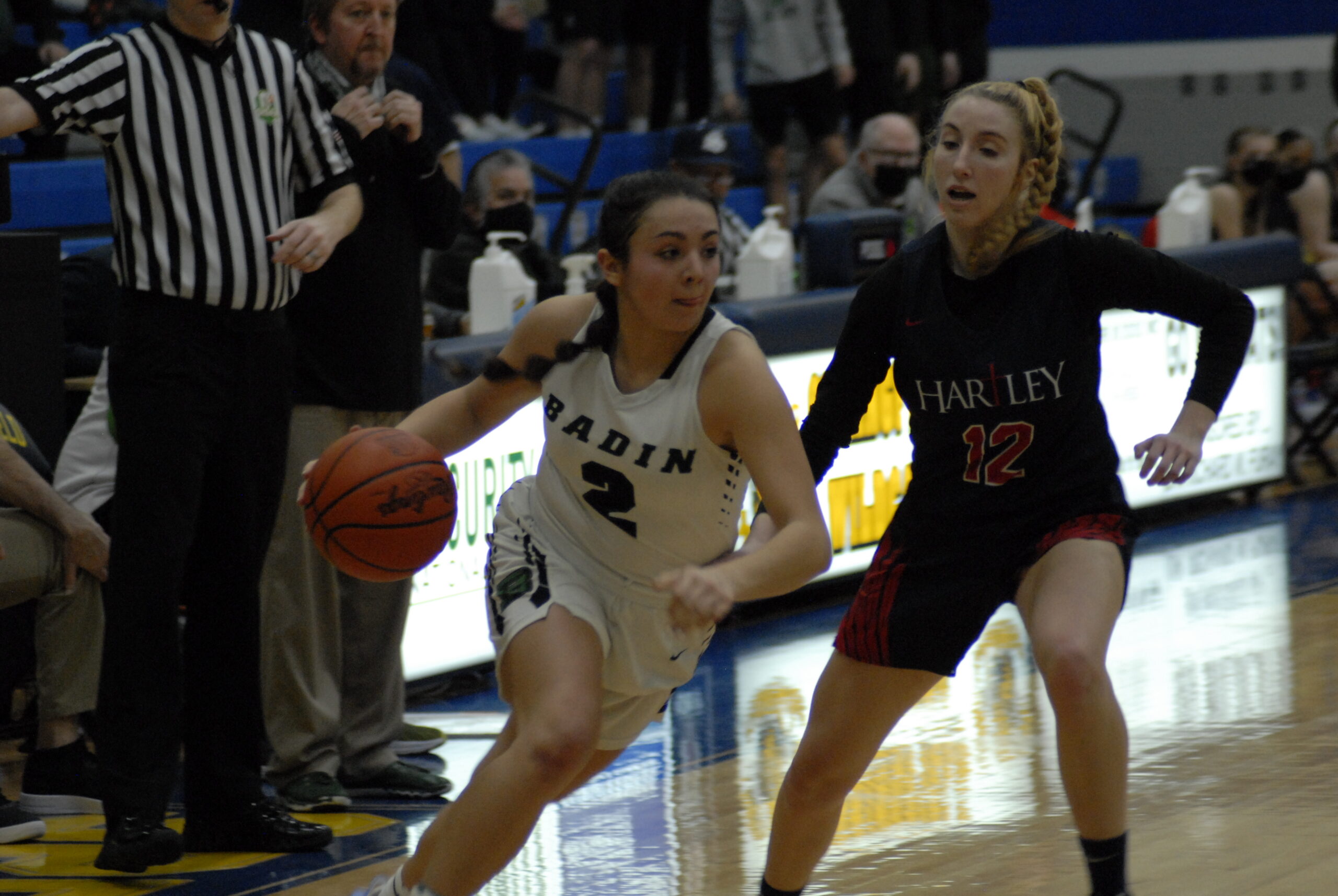 Back in mid-January, the Rams were teetering at around the .500 mark.

“Not everybody imagined us getting to this point,” Lindesmith said. “But we work hard to make it happen. It’s great to be where we are. As a team, and as individuals, we all knew we wanted to get this far. We just believe in ourselves.”

Lindesmith scored a team-high 10 points, she bucketed some big-time shots to halt Bishop Hartley’s comeback momentum, and the Rams escaped with a 50-49 Division II regional semifinal victory at Springfield on Tuesday.

Badin (18-9) has won 11 out of its last 12 contests and will square off against Greater Catholic League Co-ed rival Carroll in a regional final on Friday night at 7:30 p.m. back at Springfield. The Rams fell twice to the Patriots earlier in the season, 59-56 in OT and 45-33.

“The regular season is all preseason,” Rams coach Tom Sunderman said. “You can go 22-0, and if you lose in the second round, nobody remembers what you did. But if you have a decent season and make a run at the end, everybody will remember that. Nobody knows our record now. All they know is what we’ve done right now.”

Badin was sitting at 7-8 after its first regular-season loss to Carroll on Jan. 23. But shaking off some adversity, the surging Rams now find themselves one win away from reaching state.

“We talk about it all year long,” Sunderman said. “We had players injured, we had quarantines, and we had a lot of girls miss a lot of games this year. But we knew we can play through it. The biggest thing is that the next player kept stepping up.”

Nine players hit the scoring column for the Rams, who outscored the Hawks 20-11 in the opening quarter by using a barrage of 3s from behind the arc.

Badin never trailed the rest of the way on Tuesday until Bishop Hartley (15-6) connected on a 3-pointer that was immediately matched by a Lindesmith trey of her own with 1:41 left to play. The Rams led 48-47 at that point and they eventually closed it out.

“That’s our girls being resilient,” Sunderman said. “Mahya hitting a 3 pointer after Hartley knocked down a 3. Our girls kept believing. We just have to keep playing.

“We’re not a big team. We’re athletic, just not a big team,” Sunderman added. “You have to open up the inside, and the driving game will open up the 3. Now it doesn’t happen every game. People have been worrying about us with the 3, and that’s when we’re taking advantage lately — we’re getting the drive.”

Badin and Bishop Hartley aren’t strangers to one another. The two squads met five times between 1995 and 2000 — four postseason and one regular season. That series is now tied at 3-3.

“I think we started to panic when they started to put a little more pressure on us,” Lindesmith said. “And they kind of hurt us a little bit. But in the end, we knew that we had to keep picking it up. We made the shots when we needed to.”

“The kids held their composure out on the court,” Sunderman said. “When you’re out running around and score 20 points in the first quarter, I thought it was great for us.”

The Rams, according to Sunderman, had to face a little bit of adversity prior to arriving in Springfield. Badin’s bus never showed up at the school to pick them up.

“It didn’t even show up,” the coach said. “We got in 6 or 7 different cars, 3 (players) in a car. The girls kept their composure. The biggest thing was that we got on the court within 20 minutes of game time. We had already shot before at school, so we were OK.

“But again, that’s something I know our girls can get through. We’ve done it all year long, and we can keep it going. I’m so proud of the way the girls have handled themselves. Tonight was just another example of that.”